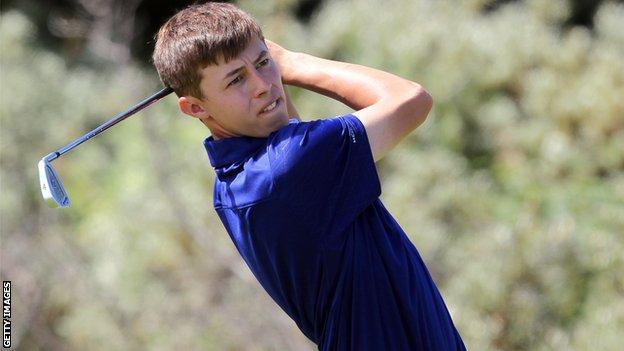 Teenage amateur Matt Fitzpatrick outperformed the likes of Rory McIlroy, Justin Rose and Luke Donald in his debut round at the Open.

The 18-year-old from Yorkshire carded a two-over 73 at Muirfield.

The Sheffield student was mistaken for being Tiger Woods' ball boy on the first practice day.

"I thoroughly enjoyed today. There were lots of highlights, not many lows," Fitzpatrick told BBC Radio Sheffield.

"I did get asked to show my badge again going into the locker room. But the best moment was on the first tee when the crowd erupted.

"Then, when I holed a big putt for par on eight, the crowd went wild and it was just a great feeling.

Matt Fitzpatrick has just sat his 'A' levels in geography, history and PE, but already has a university place booked this autumn for four years at Northwestern Chicago - the same collegiate route taken by Luke Donald

"I'm the youngest in the field, though. Maybe they just feel sorry for me."

Fitzpatrick reached the turn on two under without a dropped shot, after birdies at the second and the long fifth.

The back nine was a different story, with dropped shots at 10, 14 and 15, but he still had the mental strength to fight back with a birdie at 17 to get into red numbers before a costly double bogey at 18.

Fitzpatrick's finish matched that of fellow Yorkshireman Danny Willett an hour earlier, the European Tour pro bookending his round with doubles at the first and the 18th for a 75.

Willett will resume on Friday (first out at 06:32 BST) very close to the cut mark, while Fitzpatrick (who resumes at 07:49 BST) declined to set any second-day targets.

"I came here looking to make the cut," he said. "And I still hope to do just that.

"I'd planned to take a couple of weeks off and be sat at home watching on TV this week, but this is miles better."