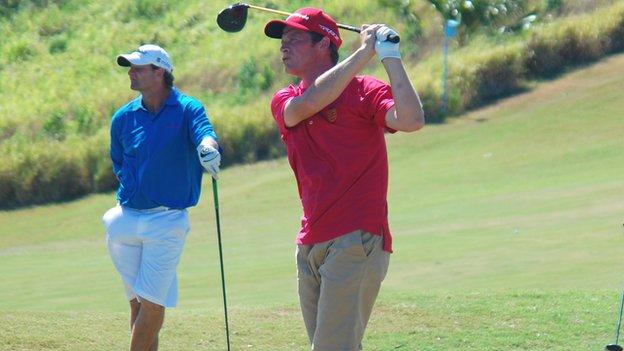 Jersey's Gavin O'Neill fired a level-par final round 71 to win a golf gold at the Island Games on a sweltering but at times breezy afternoon in Bermuda.

O'Neill had gone into the day in fourth spot, six shots off the lead.

A birdie on the first set him up for a comeback but in reality it was just a steady performance which saw him clinch the title by a single shot.

Only two players shot under par rounds all week at Port Royal, home of the PGA Grand Slam of Golf.

"After nine holes I'd taken the lead and I just felt if I played steady on the back nine there was going to be a gold medal waiting for me at the end," O'Neill told BBC Radio Jersey.

"I felt like I was a good enough player to catch the leaders up.

"I was relying on them making a few mistakes but also at the same time I had to play quality golf and that's what I did."

The Royal Jersey player should really have had a bigger lead coming up the last, but bogeyed the 17th after missing a short putt meaning he took just a one-shot advantage to the last hole.

O'Neill found the final green in regulation and wrapped up his par, before Bermuda's Jarryd Dillas missed a birdie putt from distance which would have taken them into a play-off.

Aland's Johan Lindholm, who had led after three days, shot a final round 10 over 81 but that was still enough for bronze.

The Island Games comes to an end on Friday after six days of action in Bermuda.