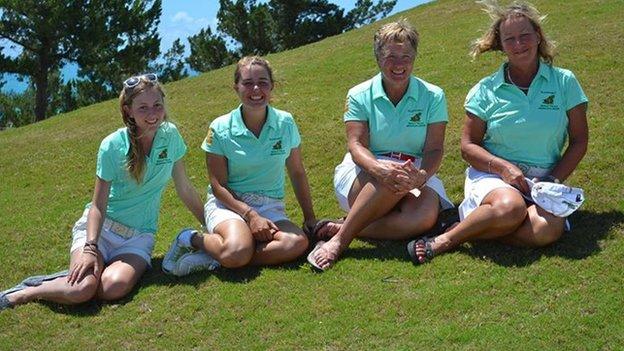 Guernsey's women golfers sealed the team gold medal at the Island Games after holding their nerve on the final day of competition in Bermuda.

A team total of 997 saw Guernsey finish three shots clear of the Isle of Wight.

"It's an unbelievable feeling to win something for your island," Ponte told BBC Radio Guernsey.

"It's amazing. I'm almost speechless at the moment."

Ponte initially came off the course believing she had missed out on a medal and was clearly upset, but a closer inspection of the scores improved her mood considerably.

"I miscounted in my head at how the other girls were doing and I thought I'd blown it," she said.

"All the emotions come out as I've worked so hard and I really thought that I'd blown it.

"We're all so close and we've got a really awesome team this year. We really given it our all and to be leading every day has been amazing. I'm so proud of all of them.

"Our motto for this week was 'keep smiling through the doubts' and that's what I felt I did and I know all the other girls did too."

Chamberlain said the beauty of the surroundings was something of a distraction to the serious business of winning a medal.

"It has been hot," she said. "The worst bit is around the 15th and 16th holes when you're next to the ocean which is the palest blue and all you wanted to do was get in the water!"

Webber added: "We're overjoyed - three shots after all those rounds is pretty close and we're over the moon."