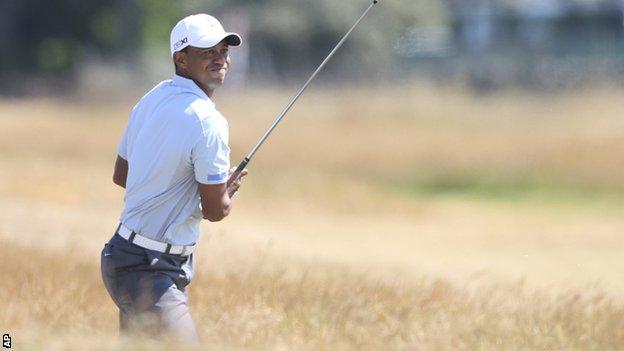 Tiger Woods said he is looking forward to a "fun weekend" after carding a level-par 71 at the Open to be just one shot off the lead.

The world number one dropped shots at the fourth, eighth and 11th holes, but three birdies, including one at the last lifted the American's spirits.

"That was a classic Tiger Woods round. He looked like he was going to rip the course to pieces at the start but one or two errors crept in.

"He was unlucky with a few putts which held him back and that cost him a bit of momentum.

"But you have to say it was a super round of golf. He didn't take any chances or real risks and it paid off handsomely. "

"I hadn't made a birdie since the fifth so it was nice to make one on the last and improve the card."

The 14-time major winner began with two pars before holing an eight-footer to move to three under. He then missed a short par-putt on the next before tapping in for another birdie on the par-five fifth.

However, Woods began to struggle with the conditions, dropping two more shots before playing more conservatively over the last seven holes. Six pars were followed with a 10-foot birdie and a celebratory fist-pump at the 18th.

The 37-year-old played alongside 2010 US Open winner Graeme McDowell, who also shot 71 to remain on four over for the championship.

"The golf course is getting quick - it was slow this morning," added Woods, who is in a four-way tie for second behind Miguel Angel Jimenez.

"G [McDowell] and I were talking about it today - how slow [the putts] are up the hill. Today we couldn't get one in the hole.

"It'll be a fun weekend. This course will be difficult."