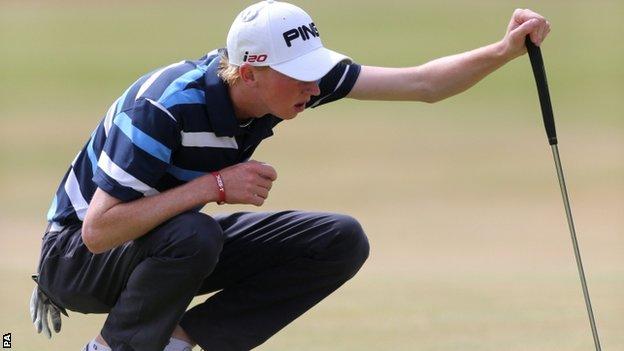 Jimmy Mullen kept his hopes of winning the Silver Medal alive at the Open by birdieing the final hole at Muirfield to ease through to the weekend.

The Devon amateur, who fired a level-par first-round 71, dropped four shots in three holes on his back nine to flirt dangerously with missing the cut.

But the 19-year-old's birdie on the third-hardest hole on the course helped him sign for a 78.

That took him through to the final two rounds on seven-over par.

"I knew the tee shot at 18 is the hardest on the course," Mullen told BBC Radio Devon. "Getting it in the fairway was the most important thing.

"I wasn't sure whether it was a seven or an eight iron, but I hit a soft seven and it was right on the flag all the way.

"I then knew I had two putts to make the cut but it dropped in the front door. What a great feeling that was."

Mullen's biggest problem between now and Saturday's tee-time is to rustle up spare tickets for the eight brothers and sisters he has in his extended family, who are already on their way up to Scotland to watch him.

The Mullen family do not have that much time on their hands, however, the Bideford boy having been paired to go out for his third round with Korean KT Kim at 09:30 BST.