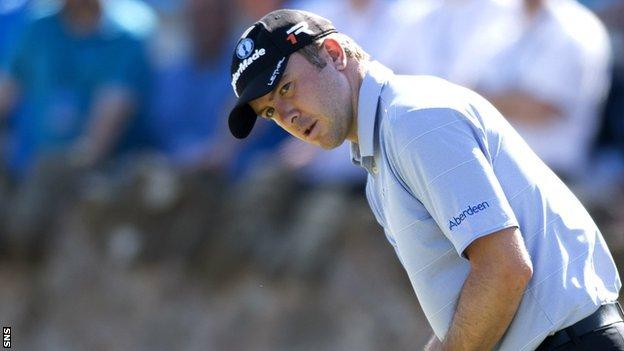 Martin Laird remains in contention to win his first major after his second-round level-par 71 kept him at one-under at the Open.

The Arizona-based Scot enjoyed home support as he fought to find his rhythm at Muirfield.

"I'm still confident. Hopefully that's my bad ball-striking round, and I managed even par," he said.

"If that's the case, I'll be in good shape for the weekend."

Laird teed off for his second round at 08:11 BST with playing partners Vijay Singh and 2011 Open champion Darren Clarke.

The Glaswegian was unhappy with his iron play until the eighth hole, but was generally content with his form on the greens.

"I putted nicely today," said the 30-year-old, who now lives in Scottsdale.

"It was a lot slower this morning than it was yesterday afternoon when they were like lightning.

"However, they were getting a little quicker towards the end.

"I don't know what it's going to be like this afternoon."

The world number 49 went out in 37 but four birdies in succession from holes nine to 12 helped preserve his place near the top of the leaderboard, currently occupied by Zach Johnson and Miguel Angel Jimenez.

Laird added: "Overall I didn't really play that well today so shooting even par shows my game is in a good spot, because I really didn't hit a good golf shot until the eighth hole today.

"I struggled coming out then had a nice little hot stretch there in the middle and I held it together coming in.

"For how I hit my irons today, I'm very, very happy with even par."

As play continued throughout the day at the East Lothian links, Laird's rounds of 70 and 71 gave him a fighting chance of being in one of the later groups in the final day of the 142nd Open.

Fellow Scot Stephen Gallacher, at four over within the projected cut of five over par, may yet join him for the weekend but Laird is the host nation's best chance of supplying a champion.

When asked if this would bring added pressure from the sun-drenched fans, he replied: "I probably have higher expectations for myself than everyone in the crowd.

"It's not something I'm really worried about. You can only look at it as something that will help you. They can pull you along.

"Even as I was struggling, you hear people shouting, 'come on!' and giving you support and that's only a good thing."