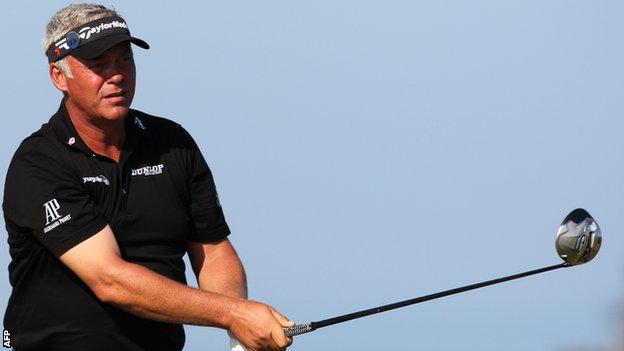 Darren Clarke recovered from a disastrous quadruple-bogey eight to lie just four shots off the lead at the halfway point in the 2013 Open.

Clarke, the 2011 winner, is on one over par after two rounds with Miguel Angel Jimenez leading on three under.

Graeme McDowell is eight shots behind the Spaniard after a battling level-par 71 kept him on four over.

McIlroy's 75 was an improvement on Thursday's 79 but he was still five shots away from making the cut.

Two-times winner Padraig Harrington and fellow Irishman Shane Lowry will be around for the weekend as both sit on six over par after their two rounds.

Clarke declared himself happy with the way he was playing - but he would have been sharing the lead had he managed a par four at the 461-yard sixth hole.

The Portrush man had put together a run of three successive birdies from the third to take him into red figures at two under.

However, he threw away all that momentum with the quadruple-bogey after taking three to get out of a greenside bunker having found rough off the tee and hacking out on to the fairway.

"I pulled my wedge left and it plugged underneath the lip of the bunker," said Clarke.

"There was no way I could get it out with my first go, I tried to be smart with my second go and then I was sensible with my third go.

"I made eight and carried on. Really, I hit the ball lovely all day."

Meanwhile, McDowell was much happier with his 71 on Friday - an improvement of four on his opening round.

And the 2010 US Open winner has not ruled out mounting a challenge for a second major when it comes down to the climax at Muirfield.

"There are quality players in this field, but I'm certainly not writing myself off," said McDowell.

"The big key for me is to get out there on Saturday and get focused on my own game, try to shoot four or five under par and - who knows - I might have a shot come Sunday afternoon."