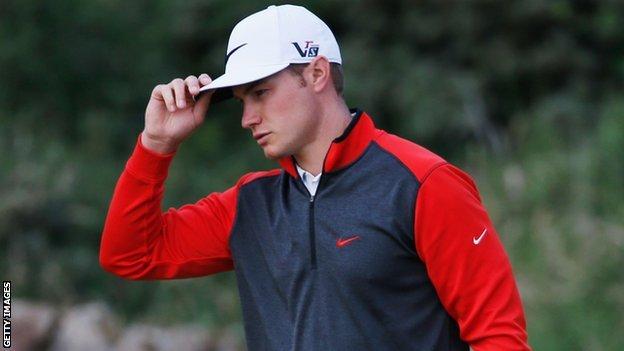 Essex golfer Oliver Fisher kept his nerve to qualify for the final two rounds of the 142nd Open Championship.

But, after shooting an excellent the 24-year-old from Chigwell struggled on day two, posting a 78 to leave him six-over.

"It's exciting to have the chance to play a weekend at a major for the first time," he told BBC Essex.

Fellow Essex man Richard McEvoy had a difficult time on day two, missing the cut after shooting an 82.

McEvoy, 34, from Shoeburyness, made the cut on his Open debut at Royal St George's two years ago for a joint-48th finish.

But, after playing well in his first round without much luck to card a 73, he did not manage a birdie all day second time around.

Fisher had an up and down day, managing three front-nine birdies (at two, five and nine), but they were interspersed with four bogeys and a double at the eighth as he went to the turn on 39.

Four more bogeys followed on the back nine as he came back in 39 too, making pars at 17 and 18 to see himself booked for the weekend.

"I've finished par/par to make the cut, so that's got to be pleasing," he added.

"Scoring's still difficult, but there's a score to be had out there if you play well. It's all about making the right decisions."

Fisher goes out for his third round at 10:45 BST, paired with Irishman Shane Lowry.