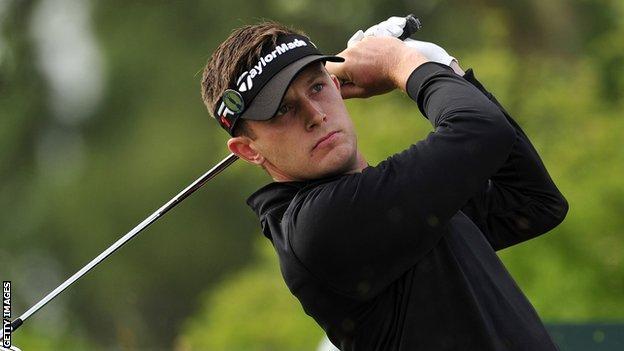 Garrick Porteous still has plenty left to play for this year, despite missing the cut at his first Open Championship at Muirfield.

The Northumberland amateur carded a second-round 77 to exit at halfway on 11-over par.

But the 23-year-old University of Tennessee student already has eyes set on a return to the United States.

Earned his place at Muirfield by becoming England's first winner of the annual Amateur Championship in 10 years at Royal Cinque Ports, since Gary Wolstenholme in 2003

"I've got two big tournaments in the US in the next two weeks, including the US Amateur," he told BBC Radio Newcastle.

"Then I hope to play in the Walker Cup in September. We'll have to see what team is picked."

Having qualified for the Open, as well as next year's Masters at Augusta and the US Open, by winning last month's Amateur Championship at Royal Cinque Ports, the first big test for Porteous is trying to win the US Amateur at Brookline, Massachusetts, stage of the infamous 1999 Ryder Cup.

But the man from Morpeth, who plays his golf at beautiful Bamburgh Castle, by the edge of the North Sea, will head back to America feeling good about the way he conducted himself on the banks of the Firth of Forth.

"The whole week has been an awesome experience," he added. "The highlight was probably my first tee shot on Thursday. The nerves were high and just go to get it down the middle and make par felt great.

"I played here four years ago in the Amateur Championship, when the greens weren't quite so fast, but they've firmed up again, and it's very tough to keep any shot on the green.

"When I birdied nine, I thought I might still have a chance of making the cut. But then I had a five at 12 and a double at 13 and that did for me. That was the end of the story for me."