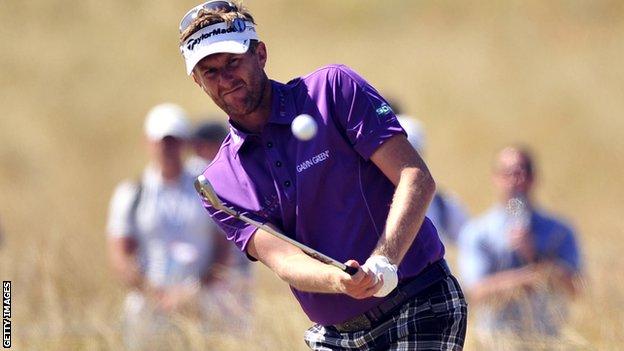 England's David Lynn made a halfway exit from the 142nd Open Championship after carding a four-over 75.

Playing in only his second Open, at the age of 39, Lynn began the week with high hopes, but in reality was up against it after a first-round 79.

The world number 47 managed just one birdie in his second round, at the long, par-five fifth.

And five bogeys left him to concentrate on planning for the next major, the US PGA at Oak Hill on 11 August.

Lynn is also in the field for the annual WGC Bridgestone Invitational in Akron, Ohio in early August, the week before the US PGA.

Lynn at the Open

David Lynn had previously only played in one Open, when he finished 13 shots behind the winner, Ben Curtis, at Sandwich, in 2003.

But, after his disappointing early exit at Muirfield, it is Oak Hill that is now on his mind.

It was at last year's US PGA, at Kiawah Island. that the Billinge-born golfer, who now lives in Hull, made his big career breakthrough, finishing second to Rory McIlroy.

Since picking up that £600,000-plus pay cheque last August, finishing eight shots behind the victorious McIlroy on the Ocean course, Lynn has carried on showing a newly acquired taste for the big occasion.

He was the first-round leader at the Masters at Augusta in April, before missing out on a first PGA tour win in May when he lost in a play-off at the Wells Fargo Championship at Quail Hollow.

But, right from the start, Lynn's first trip to the banks of the Firth of Forth proved a miserable experience.