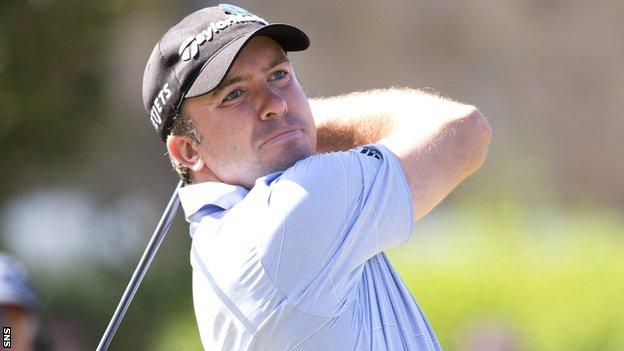 Five Scots will contest the final two days of the Open at Muirfield after the axe fell on players with scores poorer than eight-over par.

The Glaswegian's rounds of 70 and 71 leave him on one-under par.

Laird feels he can make a push for the championship, even though he did not hit top form on Friday.

He said: "Overall I didn't really play that well today so shooting even par shows my game is in a good spot, because I really didn't hit a good golf shot until the eighth hole today.

"I struggled coming out then had a nice little hot stretch there in the middle and I held it together coming in."

Bathgate's Gallacher fired an excellent one-under par 70 on Friday, to reduce the damage of his 76 on the opening day.

His round was made memorable by an eagle putt at the par-five ninth.

"I hit the wall and it came back on the green and I holed for a 30-footer, so you always keep it below the wall height," he joked afterwards, before indicating he would make the most of his early finish by lounging in a chair in the afternoon.

At six-over par, with rounds of 76 and 72, he is unlikely to trouble Jimenez and co at the top of the leaderboard but he will take immense satisfaction at making his first Open cut in six years.

Aberdonian duo Richie Ramsay and Paul Lawrie made the cut by one stroke, while Anstruther's George Murray was at nine over and just missed out.

Marc Warren was at eight-over par teeing off on the 18th hole, his score ruined by a triple bogey at the par-four 10th.

At that point it looked like he would need a birdie to survive the cut and went for broke.

However, he finished on a double-bogey six at the 470-yard hole to scupper his chances of progression.

"It was tough, with a total change in the wind direction today," said the fatigued Glaswegian, who qualified for Muirfield by dint of his performance at the French Open.

"I knew if I could make the cut it would be a huge bonus. It wasn't to be, but the way I played I didn't deserve it.

"I couldn't bring my best golf here. It's been a long road the last four weeks.

"I tried to give it one last push, but mentally and physically I am pretty tired.

"Going into your first Open you shouldn't really be tired. If there are any flaws in your game they are going to be shown up and that is what happened to me this week."

Glasgow's Scott Jamieson and Edinburgh's Lloyd Saltman ended their Open assaults on 14-over.

The Scottish amateur Grant Forrest, who had won admirers for his 73 on Thursday, carded a miserable 86 on day two.

"I felt a bit more nervous at the first tee than yesterday," said the 20-year-old.

"I can't remember the last time I shot an 86. It's quite embarrassing, but there was a lot to learn."