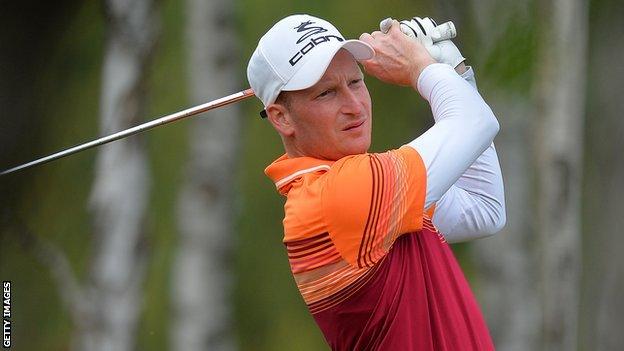 Kent's Steve Tiley qualified in comfort for the weekend at the Open Championship with a second-round 75.

Following his first-round 72, Tiley went through on five-over, with three shots to spare.

But Florida-based Londoner Brian Davis went out at halfway on 15 over after a second round 77.

Islington-born Davis, 38, had all but booked an early flight back to the USA after shooting a nine-over-par 80 on the first day.

And he only marginally improved on day two, squeezing in one birdie at 12 alongside his seven dropped shots - five of which came on the back nine.

Tiley, 30, from Herne Bay, who had missed the cut at two of his three previous Opens, is now looking to better his finish at St Andrews three years ago when, after briefly leading the field on the first day with a six-under 66, he eventually tied for 68th.

But he admits that, in such hot, dry conditions on the sun-baked banks of the Firth of Forth, the Honourable Company of Edinburgh Golfers is not getting any easier a test.

"You're not even playing any bad shots and you're still making bogeys," he told BBC Radio Kent.

"But it's nice to be through to the weekend again.

"I did take a sneaky look on 13 and saw that the cut mark was looking like eight over and I was two over at the time."

Tiley then dropped four shots in as many holes with bogeys at 14, 15 and a double at 17 to increase the heart rates of his supporters.

But a final-hole birdie, emulating his amateur playing partner Jimmy Mullen, rounded off the day nicely.