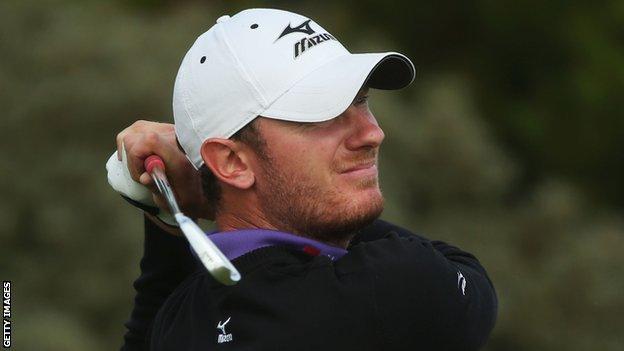 Bristol's Chris Wood squeezed through to the weekend in the Open Championship having finished his round not expecting to make the cut at Muirfield.

Wood looked set for a long trip back south when he finished on eight-over after a second successive 75.

But the afternoon scoring proved sufficiently high to allow him to sneak in by just a shot.

The cut mark was still three stokes too many for Wiltshire's Ben Stow, who carded a 77.

Ben Stow has just finished his first year at the University of Kentucky, studying communication and leadership development.

The Salisbury amateur, who shot 76 on the first day, was effectively sunk by two successive double bogeys on his front nine, at five and six, but he still cheered his spirits with four birdies - at 10, 12, 15 and 18.

"I've enjoyed every minute of it," the man from Rushmore told BBC Radio Wiltshire. "You can't be out there and not enjoy it.

"I hit some great drives. I drove the 12th and the 15th, which was 450 yards. And Robert Karlsson and Todd Hamilton were a pleasure to play with.

"I'm disappointed with my result but I've held my head high all week and, as an experience, that's one of the best things I've done in my life.

"I have asked been asked if I want to turn pro, but I will finish college first," added Stow, who has just finished his first year at University of Kentucky.

"That's in December 2014 and, in the last semester, I plan to try my luck at American tour school."

His West Country colleague Wood had an even more memorable Open experience five years ago when he tied for fifth as an amateur to win the much-prized Silver Medal at Royal Birkdale.

Wood then went even closer a year later when he finished third at Turnberry, missing out on a play-off with Stewart Cink and Tom Watson by just a shot.

After two successive failures to qualify for the Open, followed by a surprise late entry for this year's field at Muirfield, he felt his championship was over, having reached the 11th on level-par for the day, he then dropped four shots in five holes.

Later scores then brought him back into contention for the weekend, but he was still unhappy with his form.

"I didn't play well enough today to make the cut," said Wood. "A couple of the flags are in places on the back nine where the wind is blowing directly towards them.

"I've hit what I thought were decent shots and found them going through the greens. And any time you miss a green round here you are going to be in trouble."

Wood is in the third group out on Saturday morning, at 08.30 BST, paired with Korean veteran KJ Choi.