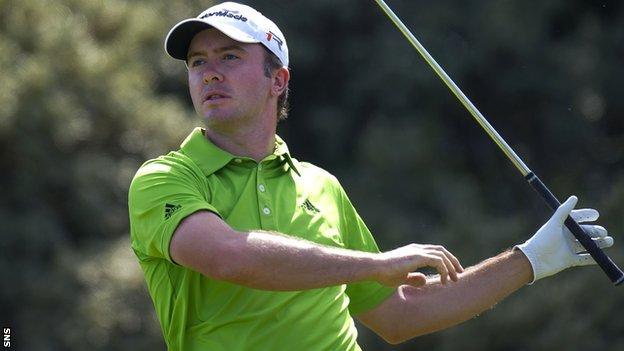 Martin Laird was left "deflated" after incurring a one-stroke penalty for a rule infringement during an already forgettable third round of the Open.

The 30-year-old Scot was within a shot of the lead after two holes, but carded a nine at Muirfield's par-four third.

Seven holes later, he did not declare loudly enough his intention to touch his ball to identify it in the rough.

Laird, the world number 49, said of his penalty: "I don't even think 'rubbing salt in the wounds' would describe it."

Based in Arizona and chasing his first major, Laird moved to within a stroke of leader Miguel Angel Jimenez with a birdie at Muirfield's second hole.

But a disastrous five-over-par nine at the next greatly damaged his chances of lifting the Claret Jug.

On the par-four 10th, he found the rough twice in succession and, on the second occasion, did not tell playing partner Dustin Johnson or the referee he was going to touch his ball to identify it.

Laird is adamant he told the ball-spotter, but that is not enough under the rules.

He said: "If I had said, 'Dustin, just went down to find my ball,' or, 'Rules official, I'm going to identify my ball', loud enough for one of them to hear, it would have been fine.

"It's the fact that none of them heard it, even though I said it.

"I said, 'I'm going to identify it'. I put the tee in the ground [to mark it] and didn't even lift my ball, just moved it a quarter roll to see the number.

"At the time I was thinking more about the golf shot I had coming up than about the ruling. It's one of those lovely rules of golf."

David Rickman, the R&A director of rules, explained the decision to turn Laird's bogey five into a six.

He said: "Martin hit his tee shot in the rough. He then looked to identify it by gently parting the grass on that occasion. That was fine.

"He then hit a second shot which stayed in the rough. On that second occasion he marked the position of the ball and touched it and moved it ever so slightly."

Laird breached rule 12-2 by not informing Johnson, though he could also have told the referee or observer assigned to the group.

The Scot was further aggrieved by the referee's decision to tell him of the infringement and penalty on the 16th hole.

"That pretty much deflated me walking down that hole and I bogeyed 16 and double bogeyed 17," he said.

"I explained the situation, I talked to the head rules official. It's just one of those unfortunate things."

Laird's third-round 81 leaves him on nine-over par and 12 shots off the lead.

His countryman Paul Lawrie, who drove back down from Aberdeen to East Lothian on Friday evening after learning he had made the cut, shot his second sub-par round in a row.

After Thursday's sickening 81 and Friday's 69, he carded a 70 to take him to seven over, the same tally as, among others, the American quartet Todd Hamilton, 1996 Open champion Tom Lehman, Bubba Watson and Webb Simpson.

Stephen Gallacher began the day on four over and was going steadily at the turn, which he reached in par 36.

However, the 38-year-old Kingsfield pro's round fell apart in the closing stages as he dropped six shots in the last six holes.

He is now nine over par and alongside Richie Ramsay, who went round in 72.

"You've just got to be so patient out there," said the 30-year-old from Aberdeen.

"If you're not, it will chew you up and spit you out."

The 55-year-old's scorecard was blighted by five bogeys and a brace of double bogeys as he racked up an 80 to leave him on 15 over along with the early pacesetter Shiv Kapur of India.