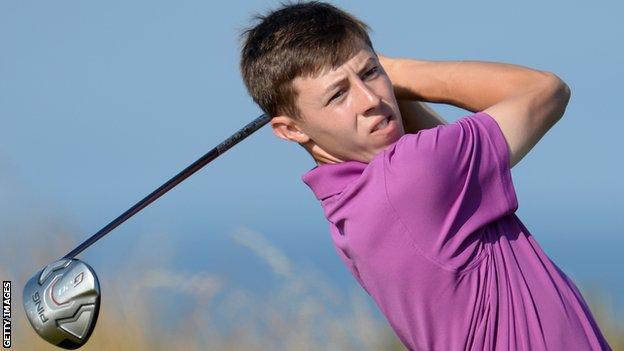 Sheffield amateur Matt Fitzpatrick admitted he might need to find a better way of playing 17 and 18 if he is to win the silver medal at Muirfield.

After matching his first day score with another two-over 73 in round three, Fitzpatrick finished nine over, two clear of his one rival, Jimmy Mullen.

But of his 15 dropped shots in three rounds this week, seven of them have now come at the final two holes.

"Those last two holes, I hate them," he told BBC Radio Sheffield.

After a birdie on 17 on day one, he then rapidly gave it back by clocking up a double bogey six at 18.

The following day, he had a double bogey seven followed by another dropped shot at the last.

Matt Fitzpatrick's first Open was as a spectator at Royal Liverpool in 2006 when, as an 11-year-old, he watched Tiger Woods win the Claret Jug.

And in the third round, shots went at both again as he finished 6-5.

It was another disappointing end to a round that began so well for the 18-year-old Hallamshire member, the youngest player at this year's Open, with a birdie at the second.

He gave it back at the fourth, only to birdie the ninth to go out in one-under 35, but then came three three bogeys on the back nine, starting with a dropped shot at 12.

"I hate the last especially," added Fitzpatrick. "Maybe I'll just have to go for it on the last day and hit my driver."

Fitzpatrick does have half an eye on joining the illustrious list of players to have won the leading amateur's medal at the Open, Rory McIlroy, Tiger Woods and Jose Maria Olazabal included, but the young Yorkshireman is keeping his feet firmly on the ground.

"The target coming here was to make the cut," he insisted "Anything else after that was a bonus. I just have to carry on playing the way I have done and see where that takes me."

Fitzpatrick did not think he had done enough to make the cut when he finished his second round on Friday lunchtime, but his father Russell assured him he still had a chance.

"My dad's fantastic at checking cuts," he said. "I don't know how he does it, but he always gets it right.

"The wind got up, the cut mark kept dropping and, when I saw I'd come down to 75th, with still a lot out there on the course, I knew I had a chance."