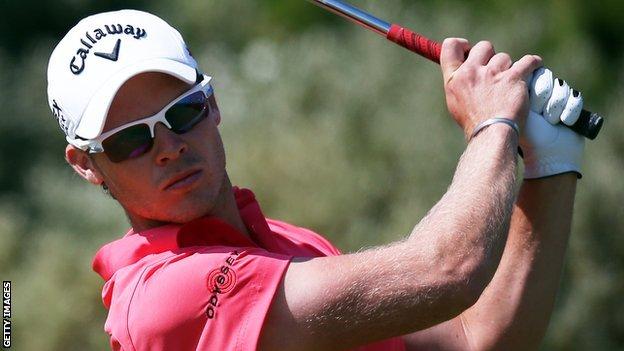 Sheffield's Danny Willett maintained his progress up the Open leaderboard at Muirfield as he signed for a second successive one-over 72.

The 25-year-old, who collected four birdies, which put the European Tour player on six over and still within touch of his best Open pay day.

"I played nicely today. I was a lot happier with my game," Willett told BBC Radio Sheffield.

"But I made a few silly mistakes, just like I did on the first two days."

Danny Willett's father is a vicar and his mum is a teacher.

"She doesn't get much chance to watch me as she's working," said Willett, who got married in April.

"But it's the school holidays now, so she came up to see me play. And it was nice to see her here. I had quite a bit of support out there, which was great."

Willett, who opened up with a 75 in the first round, was also happier with the lay-out of the course, thanks to the R&A's decision to make one or two of the pin positions not quite so challenging.

"They put a couple of the flags in more normal places," he added. "They were more accessible today. Not on the sides of hills and things.

"It was breezy out there, but the course is still in great condition and it remains there for the taking for the guy who can plot his way round and hole a few putts."

Willett got off to a great start by birdieing the first, before a run of four dropped shot in three holes from the fourth - including a double at the sixth.

And, in only his second Open, Rotherham-born Willett is already assured of his best finish, having missed the cut at Royal St George's two years ago.