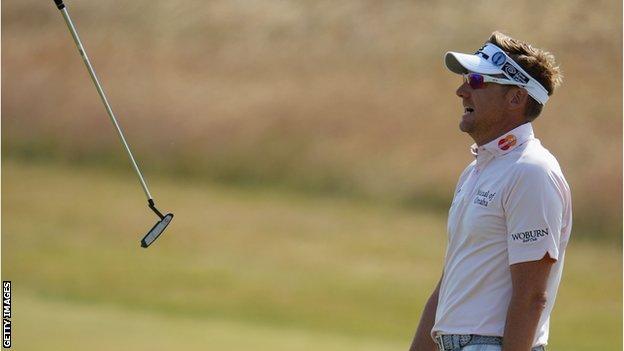 Ian Poulter insisted he was still in contention for the Open title despite ending the third round eight shots off the pace at Muirfield.

But the Ryder Cup hero believes he is still playing well enough to compete if he can find his touch on the greens.

"It leaves me with a bit of work to do," he told BBC Sport. "I just need to roll in a few putts and then we can run back up the leaderboard."

Poulter enjoyed his best Open at Royal Birkdale in 2008, when he was overtaken by a stunning finish from defending champion Padraig Harrington, who beat him into second by four shots

After three bogeys in his first eight holes, Woburn's Poulter appeared to have rescued his round when he followed a birdie at the ninth with six straight pars, but two more bogeys at 16 and 18 did nothing to help his cause.

"It's just a shame I dropped a couple of shots right at the end, as I was in a nice position," he added.

"The greens were fractionally slower. They'd obviously put a substantial amount of water short of the greens to help us slow the ball down, but it's still tricky and you've all seen what's happened over the last three days. You know what can happen."