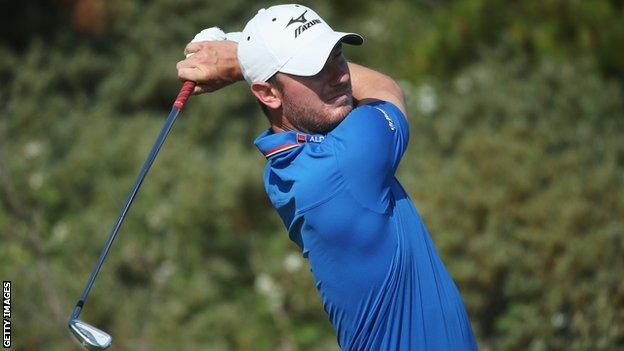 England's Chris Wood credited his overnight change of putter for the final-round one-over 72 that brought his frustrating Open to a happier end.

Having struggled with his short game at Muirfield all week, the Bristol golfer finally found his touch with birdies at 16 and 17 to finish on 13-over.

"My dad said I shouldn't do it," Wood told BBC Radio Bristol.

"But I couldn't face looking at my old putter any more. It was giving me no confidence."

Wood's frustration was fuelled by seeing the statistics outlining him in the top five of fairways hit this week.

"From tee to green I've been as good as anyone out there," he added.

Wood you believe it

"One of the guys told me I was second in fairways hit this week and I've been pretty similar to Tiger Woods in greens hit, but he's gained 10 or 12 shots on me round the greens, which is why he's out there challenging for the Open title on a Sunday afternoon.

"It's pretty clear where I need to spend my time now for the next few weeks before the WGC at Akron, Ohio, then the US PGA and I've been on the phone to the greenkeeper at my club, Long Ashton, asking him to get the putting green shaved.

"I went into one of the trucks and got my new putter made on Saturday afternoon and then spent an hour on the putting green with it.

"I just wanted something different to look at and sunk two from outside five-foot range so the decision was justified."

Having only just made the halfway cut on Friday evening, Wood's final round of the 2013 Open moved him nicely up the leaderboard.

After beginning with seven straight pars, followed by bogeys at eight, 10 and 15, he knew that one more dropped shot would have left him signing for a fourth successive 75.

But then came those two birdies at 16 and 17 to take him back to one-over for his round.

"My par this week has been 75," joked Wood, "so that was three-under. And it was nice to finish with a couple of birdies."