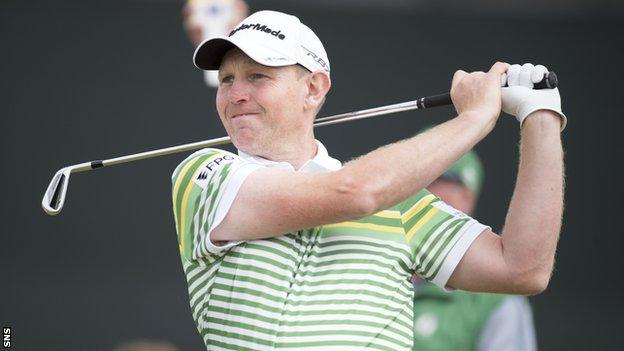 Bathgate's Stephen Gallacher shot an excellent 69 to finish the Open on seven-over par.

It was a welcome recovery for the 39-year-old who dropped six shots in the last six holes of Saturday's third round at Muirfield.

"Last night I was a bit disappointed," he said.

"But I played well all week, barring a couple of loose shots. I was only in the thick stuff a couple of times, which is what you've got to try to do."

Scots at The Open

Gallacher, the nephew of former Ryder Cup captain Bernard Gallacher, said the East Lothian links posed danger for the players all over the course.

"Early on they're really slow and then they quicken up in the afternoon when they dry out and the wind gets up a bit.

"You've got to adapt a lot.

"It's tough to get it dead. That east wind is a killer for the course."

And of the rough, he said: "Even the wispy stuff, it looks fine but then [your club] just wraps over and it goes in deeper.

"Branden [playing partner Branden Grace], you know how hard he hits the ball, today he moved it about a foot, so there's trouble everywhere."

Gallacher enjoyed living at home for the Open but he will be packing his bags for the coming weeks.

Describing it as "not a bad run", he will play in the Bridgestone Invitational at Firestone in Akron, Ohio at the beginning of August, and the US PGA Championship in Oak Hills, Rochester, which follows it.

"The more you play in these events, the more you get used to them," he said.

Meanwhile, of Gallacher's four fellow Scots playing over the weekend, only Paul Lawrie was still on the course by the time Tiger Woods teed off at 14:00 BST.

The Aberdonian finished a shot behind Gallacher on eight over, an eagle three at the ninth helping him to a one-over par 72.

Martin Laird also hit a 72 but admitted it was hard for him to get motivated for day four after blowing his chances of winning the Open at the third hole on Saturday.

"When I woke up this morning I wasn't exactly dying to get out of bed and come out and play after yesterday," he said.

'I didn't play great, I shot one over, so I'm disappointed with how the week finished."

His target now is to recover in time for the Bridgestone and US PGA tournaments.

A par at the last would have sufficed for Aberdeen's Richie Ramsay to match Saturday's 72 but instead he registered a bogey, leaving him at 12-over par for the tournament.

Sandy Lyle partnered Shiv Kapur for his final 18 holes of the event and came home in 79 to take his tally to 23 over par, the lowest of the 84 players to make the cut.