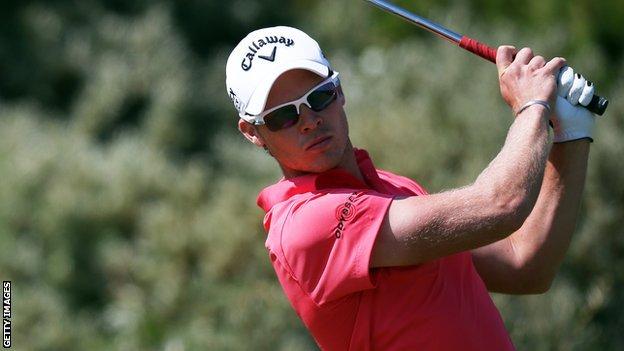 European Tour pro Danny Willett shot a final-day level-par 71 at Muirfield to end up in a very encouraging tie for 15th at the Open Championship.

The 25-year-old Sheffield golfer, who missed the cut in his previous Open at Sandwich two years ago, collected £62,250 for his week's work.

And he admitted to feeling a lot happier than after a first-day 75.

Son of a Sheffield vicar, won the English Amateur championship in 2007, earning a place in the same Walker Cup team as Rory McIlroy. Turned pro in 2008, winning his first European Tour title when he won the BMW International Open at Gut Larchenhof in June 2012

"It's a week that's got gradually better as it's gone on," Willett told BBC Radio Sheffield.

"I got frustrated on the first day. I felt I'd shot myself in the foot on Thursday afternoon."

After starting and finishing his first round of the 142nd Open with a double bogey at both the first and the 18th, Willett's scores improved steadily throughout the week.

Friday's 72 was enough to help him make the cut, followed by another 72 on Saturday.

And, by Sunday morning, the newly-wed whose season has so far been badly hampered by a back injury was hoping to make a positive final-day impact in search of points to improve his world ranking - and give him a chance of qualifying for the US PGA at Oak Hill next month.

Having made a bad start with a third-hole bogey, he recovered with birdies at the two par-fives, five and nine, to go out in 35.

And, although he dropped another shot at 14, he parred in to complete his best round of the week - and earn a leap into the world's top 100.

He has opted not to play in next week's Russian Masters but, if he maintains that top 100 position when the world rankings are republished next Sunday night, then he will be in the field for Oak Hill.

"I hope it's good enough to get me in the US PGA," he added. "If I don't get in that then it's five weeks off as I'm not playing in Russia next week and I'm not at Firestone for the WGC the week before the US PGA and there's nothing then until the Johnnie Walker at Gleneagles in late August."

"I was wondering how he'd do at the start of the day," said Willett. "And I'm very pleased for him.

"He's got a good chance of getting in the Walker Cup now too after this, so it's great for him."