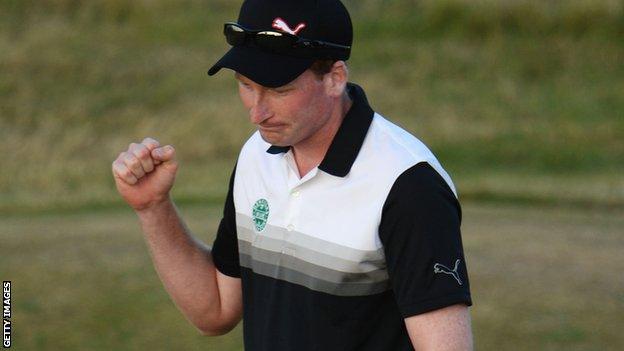 England's Steven Tiley secured the biggest pay day of his career - £39,285 - after a final-day 72 secured joint 26th place at the Open Championship.

But the Challenge Tour player from Kent admitted to being frustrated that this week's work at Muirfield will not count towards his end of season ranking.

"I really wish it counted towards the Tour," he told BBC Radio Kent.

"I'd be leapfrogging some people if it did but it's a very nice reward and I just hope I can push on now."

Tiley, ranked 17th on the Challenge Tour at the start of the week, actually found himself dropping a place on his tour's order of merit despite winning almost double the prize awarded to the man who overtook him, Italian Marco Crespi, the winner of the Mugello Tuscany Open.

However, one top 20 finish on the Challenge Tour will win back the 30-year-old's European Tour playing card.

"Unfortunately I've got to go back next week, put my head down and get on with it," he added.

Financially speaking, it's nice, the icing on the cake. But we play a sport that we love and we're lucky enough to get paid for it at the end of the week

"But I'll take a lot from this week. I'm playing well and I knew that coming into it.

"I've had a good year so far and this is just pushing on really."

The man from Herne Bay had cause to smile having matched his first-day score to finish eight-over for the championship, chiefly thanks to his best back nine of the week.

He dropped shots at six and nine either side of a birdie at the eighth to go out on one-over 37, but he came back in level-par, thanks to birdies at 13 and 18, to compensate for his second double bogey six of the week at the 14th.

Having previously only made the cut at one of his previous three Opens, when he tied for 68th at St Andrews in 2010, Tiley this time found his week's work the equal of three former champions - Stewart Cink, Paul Lawrie and defending champion Ernie Els, the winner the last time the event came here in 2002.

"This is my top Open finish by quite a bit," admitted Tiley.

"Financially speaking, it's nice, the icing on the cake.

"But we play a sport that we love and we're lucky enough to get paid for it at the end of the week."