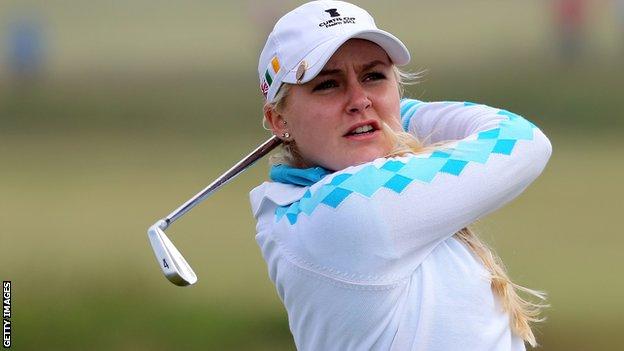 The Women's British Open takes place between 1-4 August on the Old Course at St Andrews, where the men-only Royal and Ancient Golf Club is based.

"It is time to change," the 17-year-old told BBC Sport. "We're all people and no one is better than anyone else."

Hull has finished second in her first five events on the European Tour.

In addition to the Royal and Ancient at St Andrews, Royal Troon on Scotland's west coast, Royal St George's in Kent and Muirfield, which hosted the 142nd Open Championship last week, are also men only.

The Royal and Ancient club house sits next to the first tee of the Old Course at St Andrews, where the 2013 Women's British Open will take place, although it is only one of many clubs that have access to the course, which is on common ground and is also open to the public.

Hull will be taking part in the Women's British Open after making an impressive impact in her first season on the Ladies European Tour.

She believes the introduction of golf at the 2016 Olympics in Brazil could lead to the end of same-sex memberships.

"I think the Olympics will help a lot and maybe you need a really good British player to come along too," said Hull.

"Laura Davies has done everything for this country and this game - she's been fantastic. We need more tournaments in the UK. We need more because then they [the public] will realise it is a good game."

Hull will warm up for the British Open by competing at the Ladies European Masters at Buckinghamshire Golf Club which starts on 26 July,

Cheyenne Woods, niece of men's world number one Tiger, will also be competing.

"I'm all for making golf more inclusive - whether it's gender, race, where you're from, how much money you have," Woods, 23, told BBC Sport.

"The game of golf is such a great sport - especially for kids to grow up and play it. It should be a lot more inclusive regardless of what community you come from."