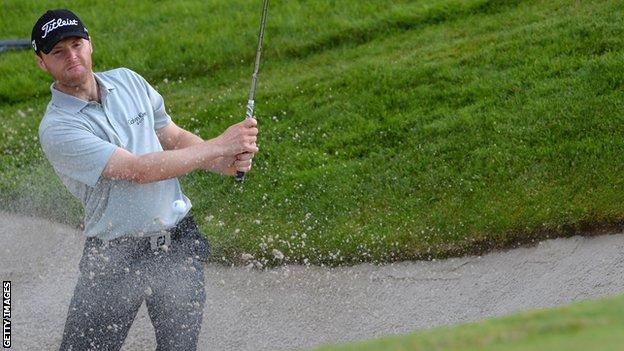 Northern Ireland's Michael Hoey will take a five-shot lead into Sunday's final round of the Russian Open.

The 34-year-old Belfast man had six birdies plus an eagle in a sizzling seven-under-par 65 in his third round.

The eagle came at the 564-yard eighth where he had a double-bogey seven in the first round of the event being played on the outskirts of Moscow.

They will need Hoey to slip up, though, if they are to stop him claiming his first European Tour title since the Hassan Trophy in March 2012.

Hoey is currently 142nd in the Race to Dubai although his European Tour card is safe for next year as a result of his victories over recent seasons, including the 2011 Dunhill Links Championship.

The 34-year-old has not finished better than 25th on European Tour so far this season and missed seven of his last 10 cuts coming into the event.

However, his opening two rounds of 70 and 67 put him firmly in contention, with today's 65 leaving him comfortably out in front ahead of the final day.

South Africa's James Kingston and France's Alexandre Kaleka are on eight-under while JB Hansen, Mikko Korhonen and James Morrison were in a three-way tie for sixth place on seven-under-par.