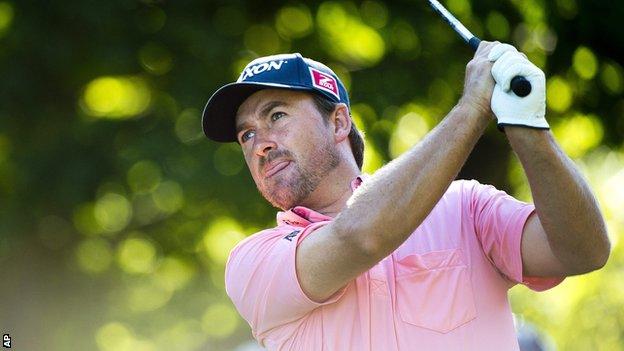 Northern Ireland's Graeme McDowell put a dismal first-round behind him by shooting a sparkling 65 at the Canadian Open on Friday.

McDowell improved on his opening 76 by 11 shots to finish three under par.

It meant the former US Open champion made the cut and a similarly impressive performance on Saturday could hoist him into contention.

Hunter Mahan, who led by two shots, has withdrawn from the tournament after his pregnant wife went into labour.

A flurry of birdies in an eight-under-par 64 saw Mahan of the United States jump to the top of the leaderboard in Ontario.

However, Mahan did not return for the third round so he could be with his wife Kandi for the birth of their first child.

His fellow American John Merrick had set the clubhouse lead on 11-under 133 after a magical 10-under 62 that contained an eagle and eight birdies.

Bubba Watson occupied third position on nine under after bettering his opening 68 by one shot, while a pair of 68s have put Patrick Reed on eight under.

Australian Aaron Baddeley has also had two rounds of 68 so far.

England's Greg Owen is seven shots off the lead after rounds of 70 and 68.