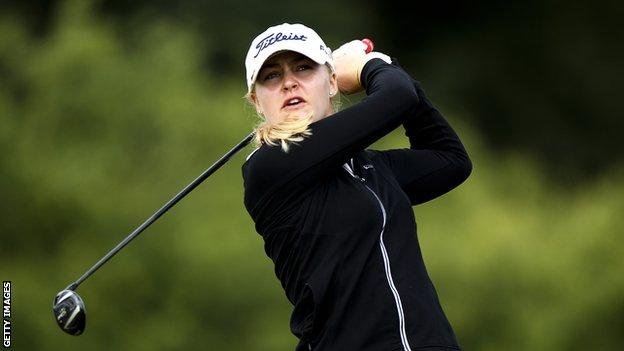 English prospect Charley Hull says she "dreams every day" of winning the Women's British Open, which starts at St Andrews on Thursday.

The 17-year-old from Kettering has made an impressive start to her first season on the Ladies European Tour, finishing second in her first five events.

"The scary thing is that in my head if I had that bit more experience I could have won all of them," Hull told BBC Sport.

"I'd love to win the British Open."

Standing in Hull's way this week is South Korea's formidable Inbee Park, the world number one, who is bidding to become the first female golfer to win four consecutive major titles.

Australia's Karrie Webb is another contender on the Old Course - the 38-year-old won the Ladies European Masters on Sunday at Buckinghamshire Golf Club, with Hull finishing in a share for ninth.

The Women's British Open is the final qualifying event for the Solheim Cup and Hull's primary focus this week is likely to be making the European team.

She is in contention to make her debut against the United States in Colorado next month after a fine debut season in the professional ranks.

She was very close to winning her maiden title in Germany, only missing out to last year's European number one Carlota Ciganda in a play-off.

Hull says her fine start to her pro career is down to a combination of hard work and picking up knowledge from 1969 Open champion Tony Jacklin earlier this year.

She befriended 69-year-old Jacklin at the 2012 British par-three tournament and has stayed with the 1970 US Open winner at his home in Florida.

Jacklin has described the teenager as a "phenomenon" and a "terrific talent", saying he has talked to her for "many hours" about her game.

"You don't see that kind of dedication and ability that she's got very often and you just knew that she just wants to win golf tournaments," said Jacklin.

"She's a very unusual girl and I think she's going to dominate."

Hull's three-week stay with Jacklin gave her the opportunity to play golf every day, often with Jacklin's son Shaun, a professional golfer.

"I picked up little tricks and stuff," said Hull of her time in Florida.

"His wife, Astrid, was lovely and I learned a lot off her as well, from how to deal with the media down to eating the right things."

Hull, who says winning the British Open would "feel right", will be supported at St Andrews by her two sisters Nicole, 27, and Lisa, 34, as she looks to become the first English winner since Karen Stupples in 2004.

"I dream about it every day," added Hull. "Honestly, I do. I think about it all the time. But one shot at a time."