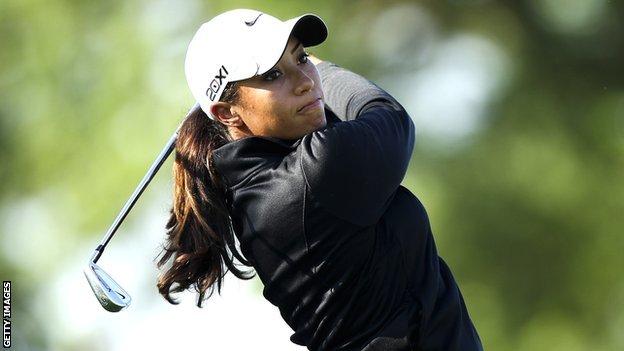 Cheyenne Woods slipped down the field with a 71 on the second day of the Ladies European Masters at Buckinghamshire Golf Club and is tied for 17th place on six under par.

But they have have been joined on 12 under par by Klara Spilkova, while Australia's Bree Arthur is 11 under.

England's Charley Hull, 17, is a shot further back after firing a 66.

To qualify for next week's British Open, Woods - niece of 14-time major winner Tiger - needs to be among the top three finishers who have not already qualified for St Andrews.

The 23-year-old is embarking on her first full season as a professional as part of the Ladies European Tour.

If she is unsuccessful at the European Masters, which runs from Friday to Sunday, she faces an anxious day in final qualifying at Kingsbarns Golf Club on Monday.

English veteran Laura Davies, 49, improved on her first-round 72 with a 69 to move to three under par, but is tied for 34th place, nine shots off the lead - "miles back", according to Britain's most successful female golfer of all time.

She added: "It's desperate times now for me, so I just need to keep putting in the good rounds. I've got to try and shoot seven, eight, nine under."

Hull was pleased to again make a quick start, carding five birdies on the front nine, which she described as "pretty good".

"I got in cruise control and made a couple of birdies coming in, and a bogey. I hit a few good fairways but it was a solid day," added the teenager from Kettering.

"I should have been a few more under but it's a big day tomorrow so I'll look forward to going out there and making some birdies and hopefully some eagles."

Hull has already qualified for the British Open at St Andrews, which starts on 1 August, having secured second place finishes in five tournaments in her first season as a professional on the Ladies European Tour.

She was very close to winning her maiden title in Germany, after only missing out to last year's European number one Carlota Ciganda in a play-off in May.