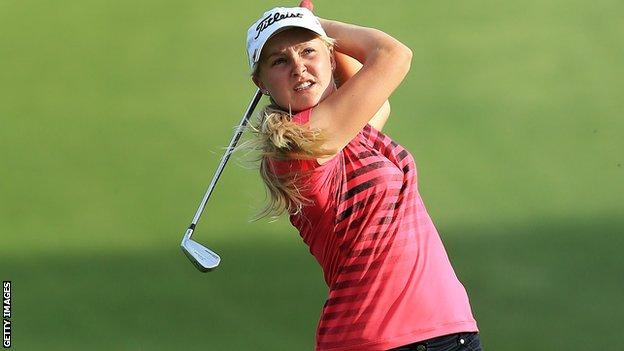 English prospect Charley Hull warmed up for the British Open with a top 10 finish at the Ladies European Masters, eight shots behind winner Karrie Webb.

Hull, 17, had been well placed to secure her first professional win at one stage but carded a final round 74

Australia's Webb won by a single shot ahead of South Africa's Ashleigh Simon.

Cheyenne Woods, Tiger's niece, will have to try to reach the Open in final qualifying at Kingsbarns Golf Club on Monday after finishing joint 16th.

Hull is in contention to make her Solheim Cup debut for Europe against the United States in Colorado next month after a highly impressive debut season as a professional.

But on Sunday she failed to repeat the good form she displayed in first two rounds at the Masters, when she shot 68 and 66 respectively at the Buckinghamshire Golf Club.

The Women's British Open starts at St Andrews on Thursday.