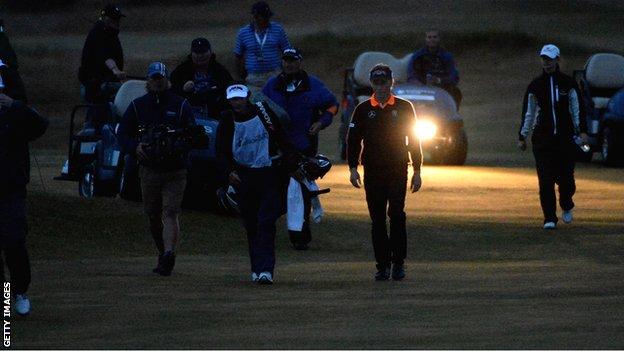 Bernhard Langer threw away a two-shot lead on the final hole of the Senior Open and had to settle for a play-off with American Mark Wiebe.

The pair finished on nine under and two play-off holes could not separate them before darkness fell at Royal Birkdale.

They will resume their battle at 08:00 BST on Monday.

Langer, 55, looked on course for his second Senior Open title but found the bunker on the 18th hole and took a six to finish with a level-par 70.

Rain and lightning caused play in the final round to twice be suspended.

Langer held a three-shot lead heading into the final day, and looked to have secured the title with another solid round.

Wiebe, who shared the lead with Langer after the second day, carded a four-under-par 66 on Sunday which looked good enough for outright second until Langer's meltdown on the 18th.