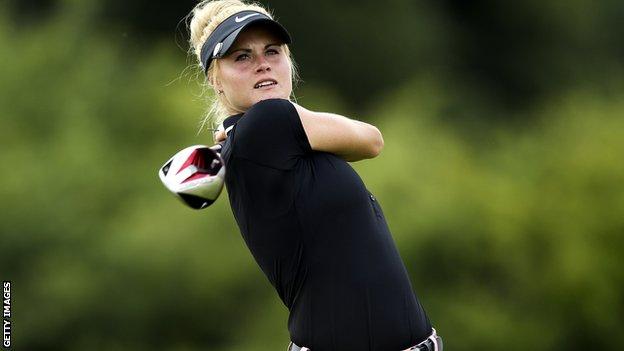 Scotland's Carly Booth carded a three under par round at Kingsbarns to take one of 16 qualifying places at the Women's British Open.

Alongside 12 other players on three under, Booth tied for joint 13th and entered an eight-way play-off.

England's Eleanor Givens, Bronte Law (a), Hayley Davis (a) and Lauren Taylor (a) all failed to make it through.

Booth Tweeted after coming through the play-of : "I made it!! Officially into the Women's Open 2013!! Couldn't be happier."

She will join Catriona Matthew for the second consecutive year as the only other Scot competing in the Women's Open at St Andrew's, with fellow-Scots Pamela Pretswell and Kelsey Macdonald missing out narrowly by one shot with rounds of 70.

Other Scots Vikki Laing, Michele Thomson and Fiona Lidell (a) were among the rest of the field who failed to qualify in Monday's event.

Heading the field for a long period of the day was Welsh Amateur Amy Boulden on four under par, but soon China's Xiyu Lin brought in a course record of a 7 under par 65, with England's Emily Taylor and Denmark's Malene Jorgensen both carding 66s.

Among the big names to miss out this year are Tiger Woods' niece Cheyenne Woods and England's Melissa Reid, who shot a 74.