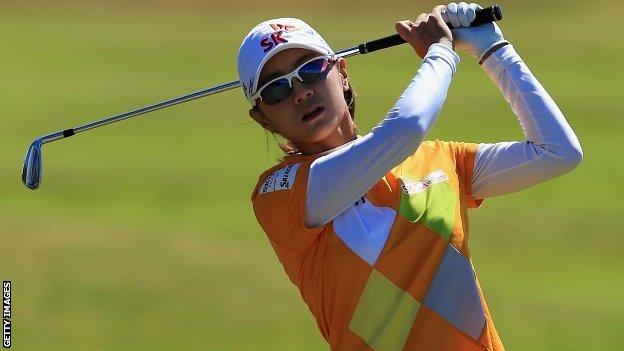 Former US Open champion Na Yeon Choi shot a second successive round of 67 to take the lead after two rounds of the Women's British Open at St Andrews.

The South Korean made six birdies and one bogey to reach 10 under par, one shot clear of Japan's Miki Saiki (66).

Overnight leader Morgan Pressel of the United States remains in contention on eight under par after a bogey-free 70.

Inbee Park's hopes of an historic fourth straight major title suffered with a 73 that left her on two under.

Scotland's former champion Catriona Matthew is also on two under after a 74, while England's Liz Young and amateur Georgia Hall slipped back to one under alongside compatriot Holly Clyburn (73) after they both shot 75.

English youngster Charley Hull, 17, followed up her disappointing 76 on day one with a solid 72 of two birdies and two bogeys.

Park, who made a birdie on the 18th for the second day running, said: "A little bit of everything wasn't really working well out there today, but it was tough conditions. I think I grinded (it out) really well out there.

"I was a little bit unlucky with the draw, getting afternoon today, not playing in the morning when it's lovely, but that's the way it is."