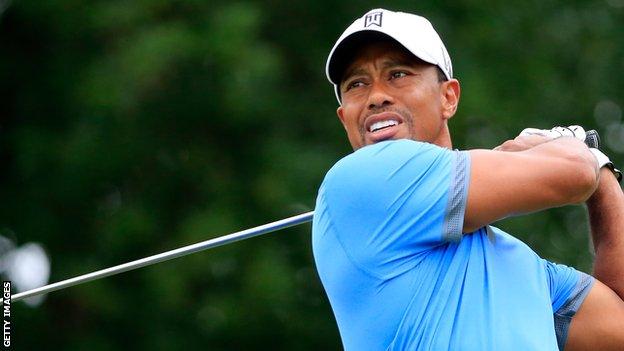 World number one Tiger Woods equalled his career-best round of 61 to take a seven-shot lead after two rounds of the Bridgestone Invitational.

He needed two more birdies from the last five holes to score just the sixth 59 on the PGA Tour, as the American equalled the course record at the Firestone Country Club in Ohio.

His nine-under-par round included seven birdies and an eagle.

I felt pretty relaxed with it. If I hadn't shot 59 before it would have been a different story

Pursuing his eighth victory at Firestone Country Club, Woods opened birdie-eagle. He had two more birdies on the front nine, and had four in a row to start the back nine.

Chasing his first 59, he missed birdie putts inside 10 feet at 15 and 17, but saved par on the last with a 25-footer after an errant drive.

The last person to shoot 59 in a PGA Tour event was Australian Stuart Appleby in the final round of the Greenbrier Classic in 2010.

American Al Geiberger was the first in 1977, and compatriots Chip Beck, David Duval and Paul Goydos also accomplished the feat.

"I certainly could have done it," said Woods. "I've done it before (in practice at his home course of Isleworth).

"I felt pretty relaxed with it. If I hadn't shot 59 before it would have been a different story. I was only nine under, so it's not a feeling that I'm uncomfortable with.

"I had five holes to go, still a lot of golf to be played, and anything could have happened. It could have gone either way."

England's Paul Casey is in a tie for 19th at level par - 13 shots behind leader Woods - with compatriot and US Open champion Justin Rose, Northern Ireland's world number three Rory McIlroy and another Englishman, Ian Poulter, all a shot further back.