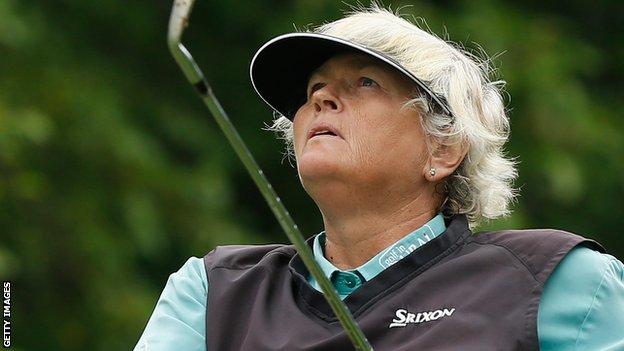 Former world number one Laura Davies will not feature in Europe's Solheim Cup team for the first time after missing out on a wildcard pick.

The 49-year-old is the highest points scorer in the event's history, after playing in all 12 previous events.

Davies tweeted: "Oh well, no pick from the captain. Didn't really deserve one. Mind you still a bit disappointed."

England's Charley Hull, 17, was picked for the match against America at Colorado Golf Club from 16-18 August.

Davies, who has won four majors, made her Solheim Cup debut in the inaugural competition at Lake Nona in 1990 but has not been selected by captain Liselotte Neumann after missing the cut in the British Open at St Andrews.

In her last appearance, at Ireland's Killeen Castle in 2011, she became the highest points scorer in the competition's history, her total of 25 passing Annika Sorenstam's old record of 24.

"I think she (Davies) is disappointed, but she was very good when I spoke to her on the phone," Neumann told Sky Sports News.

"She said I wish you all the best of luck, go out to Colorado and get it done."

Hull, who finished second in her first five tournaments this year, was joined as a wildcard pick by England's Jodi Ewart Shadoff, Sweden's Caroline Hedwall and Italy's Giulia Sergas, as Europe look for their first ever victory on American soil