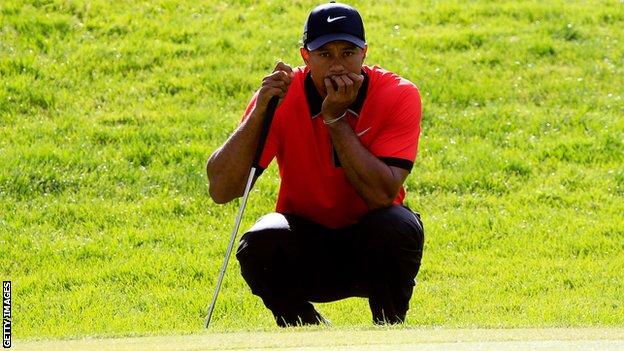 As the golfing world heads to upstate New York for the PGA Championship at Oak Hill, predicting the outcome is astonishingly difficult. The backdrop to the final major of the year could not be more intriguing.

As always, the winners of the three preceding majors are grouped together. It is a stellar line-up. Masters title holder Adam Scott,US Open winner Justin Rose and Open champion Phil Mickelson share each other's company for the first two rounds.

This contrasts to a decade ago, when the first three grand slam events had been won by Mike Weir, Jim Furyk and Ben Curtis. Somewhat in keeping with the 2003 trend for the unheralded, the PGA winner was Shaun Micheel.

The 2013 majors have yielded as champions the current world numbers five, four and two, so perhaps we are due another elite winner this week.

Yet again Woods goes into a major off the back of a significant and emphatic victory following his win at Firestone in the WGC Invitational.

How the bookmakers must love the 14-time major champion. Repeatedly he turns in a pre-major display to provoke a slashing of his odds and the waging of a welter of money on his chances.

On each occasion in the past five years, though, he has flattered to deceive and left punters counting the cost.

Will it be any different this time? The portents aren't good, even though Woods has an enviable record of putting himself in position to challenge in the majors.

Converting the potential into the substance of victory has proved beyond the world number one. Since the start of 2012, Woods is eight under par overall for the first two rounds of all the grand slam events put together and 25 over par in the last two.

He has been prone to pushing too hard at weekends. His putting touch deserts him and inflexible game plans come up short at the point where he needs to pounce.

The X-factor that Mickelson displayed at Muirfield to romp home on the back nine three weeks ago appears beyond his great rival these days.

Memories of Oak Hill aren't encouraging either. In 2003, Woods failed to break par in any round and finished 12 over as he struggled to a share of 39th place.

There is no doubt Woods has become a horse for certain courses. The winner of five PGA Tour titles this year is unstoppable at places such as Firestone.

This week, Oak Hill is less likely to fall into that category. He will have to buck a dispiriting trend to claim major number 15 - having not won any of his previous 17 since lifting the US Open in 2008.

McIlroy doesn't need to remember anywhere near as far back for his last major triumph. He is the defending champion this week.

Twelve months ago, he arrived at Kiawah Island and looked out on the course with a feeling that something good was about to happen.

Anyone who witnessed the Northern Irishman's quiet confidence in his pre-tournament news conference that week would have been encouraged to have a small wager on his chances.

Those who backed their instincts were duly rewarded when McIlroy romped to victory by eight strokes. But that was with his old sticks and a more settled management background.

Life appears a lot more complicated now with one of his hardest objectives to fathom the art of finding a fairway with his new driver.

McIlroy has always been capable of clicking back into form. All year he has suggested the moment is just around the corner but the road to that junction has an eternal feel at the moment.

Now the pressure to find the right route is at its greatest. From here on, he defends the bulk of his world ranking points and a continuation of current form would lead to a significant fall down the rankings.

The margins are so fine at the top of the game and there are so many potential winners. In the decade since our last visit to Oak Hill, there have been 26 different major winners.

Only Woods (six), Mickelson (five), Padraig Harrington (three), McIlroy (two) and Angel Cabrera (two) have won more than one in this period.

This is the last chance of 2013 for the world's best to join that roll of honour. It is, though, no longer "Glory's Last Shot", as the PGA of America liked to market their major.

At the behest of PGA Tour boss Tim Finchem, the slogan has been dropped. The Commissioner has successfully argued that there remains plenty more scope for glory in his upcoming FedEx Cup series.

The pay-back was an extra week's break between the climax of his multi-million dollar jamboree and the start of the 2014 Ryder Cup.

So this week, we don't officially have the last shot at glory - just the final opportunity for players to claim victory in one of the four events that define a career.

Can Lee Westwood or Luke Donald break their majors duck? Can McIlroy find a semblance of form? Can Woods translate tour form to the major arena? Will there be another stellar champion or an unheralded hero?

These questions and more tumble at the rate of the nearby Niagara Falls. A decade's worth of clues leave us no nearer knowing the answers.