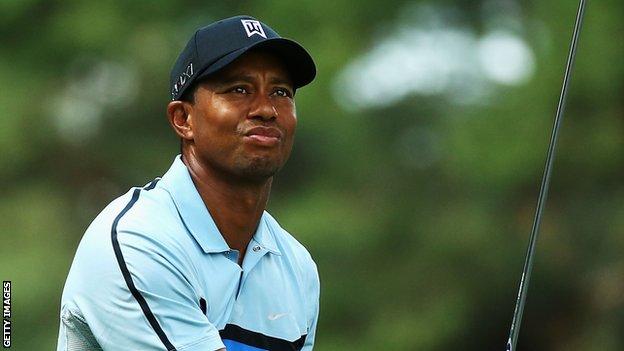 Tiger Woods insists his bid for a 15th major title remains on track despite a double-bogey finish to leave him six shots adrift on day one of the US PGA.

The world number one carded a one-over-par 71 to trail co-leaders Jim Furyk and Adam Scott, whose rounds of 65 were one off the course record.

"I'm still right there," said Woods, who has won five times this season.

"I'm only six back and we have got a long way to go. I played really well today."

Late charges at the US PGA

Tiger Woods is six shots off the lead - the biggest deficit after 18 holes to win the US PGA Championship is eight.

Woods, who won the WGC-Invitational by seven shots on Sunday, began where he left off and birdied the 598-yard, par-five 13th and the short 15th after starting on the 10th tee.

Another pin-point iron approach set up a further birdie chance on the second but he missed from a few feet and struggled from there on.

"(It was a) tricky little putt," said Woods, whose group were being timed for slow play at that stage. "Probably should have taken a little bit longer but we were on the clock and had to get going, but I ended up blocking the putt anyways down the hill."

Woods, chasing his first major title since 2008, bogeyed the 570-yard par-five fourth after failing to get up and down from a greenside bunker, and dropped two further strokes on the ninth after a poor chip from the rough caught another bunker short of the green.

"I was just trying to play 20 feet long and putt back and get my bogey and get out of there," he said of the ninth. "If I happen to make a 20-footer, so be it. But it came out nowhere and I didn't get over the bunker.

"The round realistically could have been under par easily. I feel like I played well today and made some nice key putts and the key is I left it in all the good spots too."