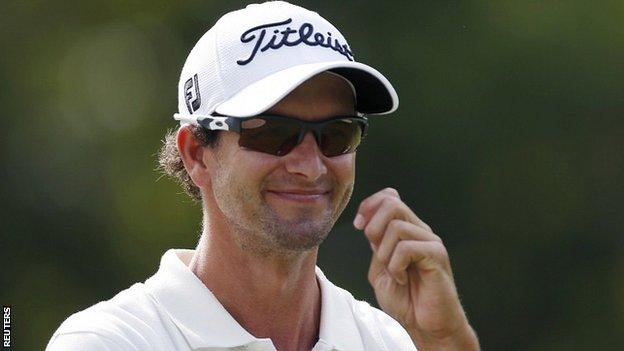 Masters champion Adam Scott and US veteran Jim Furyk edged into a one-shot lead after the first round of the 95th US PGA Championship at Oak Hill.

This is Lee Westwood's 16th attempt to win a PGA Championship and never before has he scored as low as 66. It was particularly impressive in the light of his recent disappointment at the Open and all the more creditable as he was one of only two players not to drop a shot in the first round. Matt Kuchar (67) was the other. Rory McIlroy should feel encouraged by his 69 which was a step in the right direction and Paul Casey has the chance to revel in life on a major leaderboard again after superb putting in his 67.

The 43-year-old Furyk, who won his sole major at the 2003 US Open, made his score in the morning after heavy overnight rain softened the course. Furyk, who missed the cut in the Open and US Open, reached six under before dropping one at the last to set the clubhouse lead.

Australia's Scott led the Open late in the final round before finishing third at Muirfield three weeks ago, and the 33-year-old continued his form in the afternoon wave at Oak Hill with five straight birdies from the fourth.

Following a delay of more than an hour because of storms and the threat of lightning in the Rochester area, Scott added another birdie at the 14th before stumbling with a bogey on 17 and fighting hard to save par at the last.

"I got on a bit of a roll and hit a few shots clean," said Scott, as he and Furyk flirted with the course record of 64 set by Ben Hogan and Curtis Strange. "You've got to take advantage of that if it happens because it doesn't happen very often at majors.

"I hung in there and that was a great par at the last."

Westwood, who took a two-shot lead into the final round of the Open before ending alongside Scott and Ian Poulter, had a bogey-free round as he chases a first victory in his 63rd major. The 40-year-old Englishman has now finished in the top three a record eight times in majors without winning one.

"Somebody was asking me the other day, 'Does it get you down and do you get stressed when people go on about not winning a major championship?"' he said.

"I said, 'No, you really don't get stressed about golf any more'. I've played golf for 20 odd years out here on the best courses in the world and I get up every day and go and do something that I love.

"Golf doesn't stress me or disappoint me very often any more. In fact I can't remember the last time it did. Just get on with it and just realise how lucky you are."

Casey, who recently won the Irish Open, is beginning to show signs of the form that took him to number three in the world in 2009. The 36-year-old, who broke his collarbone in a snowboarding accident at the end of 2011, bogeyed the 10th, his first, but followed with eight pars and then made five birdies on the way home with just one dropped shot.

Woods went into the tournament as hot favourite to clinch a 15th major title and first since 2008 after storming to his fifth win of the year in the WGC-Invitational on Sunday.

But the world number one's form was a touch off all day and he double-bogeyed his last after fluffing a chip from thick rough into a greenside bunker.

"I'm still right there," said Woods. "I'm only six back and we have got a long way to go. I played really well."

Defending champion McIlroy, who won by a record eight shots last year, cut a different figure to the often disconsolate sight at the Open where he described his play as "brain dead". The 24-year-old was three under after four holes before swapping two more birdies with four bogeys.

"I got off to a really good start and was feeling good," he said. "Bogeys on 10 and 11 halted my momentum a little bit but overall one under isn't a bad start. I feel a lot sharper with my game.

"I had a chance to shoot a few lower there but anything in red figures on the first day of a major is not a bad thing."

Mickelson, who surged to his first Open title with a final-round 66 at Muirfield, slumped to three over after four holes but rallied well with four birdies either side of the weather delay before dropping two shots at the last after tangling with trees.

US Open winner Justin Rose, playing alongside Mickelson and Scott in the traditional major champions group, dropped a shot at the last for a two-under 68 alongside colourful Spaniard Miguel Angel Jimenez, who was on for a 66 before a double-bogey on 17.