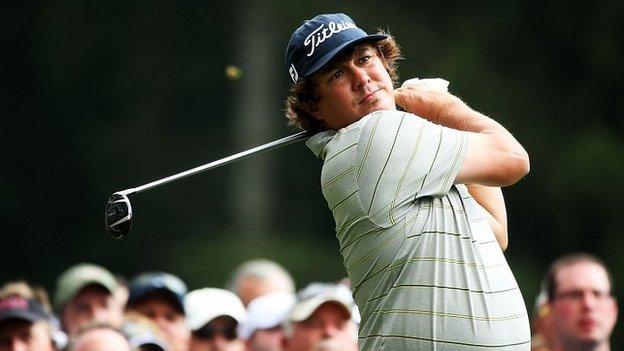 Jason Dufner just missed out on the lowest round in major history but hit a course-record 63 to grab a two-shot halfway lead in the US PGA.

The American, 36, was short with his 12ft birdie putt for a 62 but ended nine under par to take control of the year's final major at Oak Hill.

World number one Woods was unable to recreate the spark that yielded a fifth title of the year on Sunday and hit a level-par 70 to end one over.

Defending champion McIlroy was in danger of missing a second straight cut at a major after slipping to four over for the tournament through 10 holes during the worst of a morning deluge. But the 24-year-old fought back well with four birdies in his last seven holes for a 71 and level par.

Lee Westwood, who was tied second overnight, also dropped back with a three-over 73 to leave him one under.

Oak Hill was rendered defenceless by the heavy rains that fell throughout the morning. There has been little wind and what should have been a formidable test provided target golf for any player capable of consistently finding fairways. Dufner possesses one of the game's sweetest swings and looks a major champion in waiting. The 36-year-old was tentative in his bid for history at the final hole. A bolder approach over the weekend may yield the title he should have won two years ago. On that occasion he surrendered a five stroke lead down the stretch before losing a play-off to Keegan Bradley.

But the day belonged to Dufner, still chasing a maiden major after several recent near misses, who made the most of a favourable draw and went out in warm afternoon sunshine on a course softened by its earlier soaking.

The fireworks began when his approach to the second span back 20ft and dropped into the hole for an eagle. He made a long birdie putt on the fourth green, picked up another shot at the fifth and holed a lengthy putt to save par on the seventh to go out in 31.

Turning for home, the laconic two-time PGA Tour winner made further birdies at 11, 13 and 16 before firing a pin-point approach into the 18th green, only to leave his history-making putt short.

"It's tough," said Dufner, who became the 24th player to shoot 63 at a major. "I showed a little bit of nerves there leaving it short. It's one you would like to gun and have a chance at history (but) I am in pretty good company.

"The history of the game is something that is dear to my heart. To be part of history is a neat accomplishment, I never thought a guy from north east Ohio would be able to do these things."

But Dufner's was not the only round close to the history books.

American Webb Simpson was on course for an early 62 but faltered late on to equal the then course record of 64, set by Ben Hogan in 1942 and then again by Curtis Strange in 1989. The former US Open champion ended four under alongside 2010 US PGA winner Martin Kaymer (68) and American Charley Hoffman (67).

While others were making hay, Woods mixed four birdies with four bogeys and cut a frustrated figure as he chases an elusive 15th major and first since 2008.

Scott, who made his major breakthrough at the Masters in April, continued the form that saw him lead late on during the Open last month and set the clubhouse target at seven under at Oak Hill, dubbed "Soak Hill" after the torrential morning rains.

"I think the platform has never been better for me to go on and win multiple majors," said Scott. "I guess you've got to take the confidence and form of winning a major and run with it. I can't take my foot off the gas just because I achieved something great at Augusta."

Scott's playing partner Rose, who is also targeting a second major of the season after winning his first at Merion in June, fired a stunning homeward nine of 29 for his 66.

"It's wonderful to be in this situation right now, talking about having done it, talking about feeling like you can win more, believing in yourself and not talking about how I hope it could happen this week. So I think that alone makes it easier," he said.