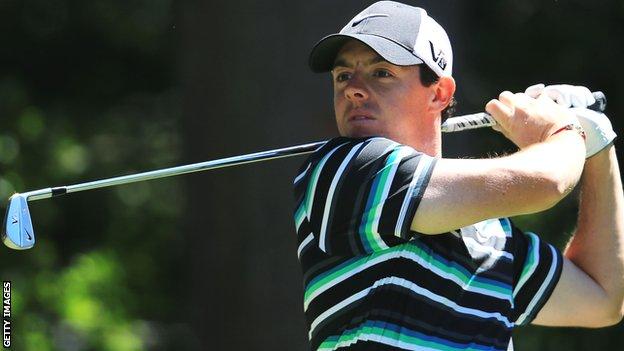 Rory McIlroy moved into contention in the US PGA Championship after a three-under-par 67 on Saturday left him six off the pace going into the last round.

The world number three birdied the tough final two holes to move to three under for the tournament.

McIlroy, who was four over during the second round, finished by chipping in from the edge of the 18th green.

Graeme McDowell ended on two over after a 73 while Darren Clarke's 74 left the former Open champion on six over.

Shane Lowry also finished on six over following a 75.

McIlroy was one under for his round before an incredible finish on two of the hardest holes, starting with a long putt on 17 before the chip at the last.

He told Sky Sports: "It's tough out there. The wind is swirling - one minute it goes right to left, the next it goes down and it's very had to pick a club.

"It makes you unsure when you're over the shot and means you make a few bad swings.

"I scrambled very well, got up and down when I needed to - the par threes are very tough, playing much tougher than yesterday.

"Hopefully the breeze stays up and the leaders can come back a little bit and I can do something on Sunday."

McIlroy is in a share of seventh place, six shots behind leader Jim Furyk.

American Furyk leads his compatriot Jason Dufner by one stroke with Sweden's Henrik Stenson a shot further back.

Another Swede Jonas Blixt is also on six under while Steve Stricker and Masters champion Adam Scott are two shots ahead of defending champion McIlroy.