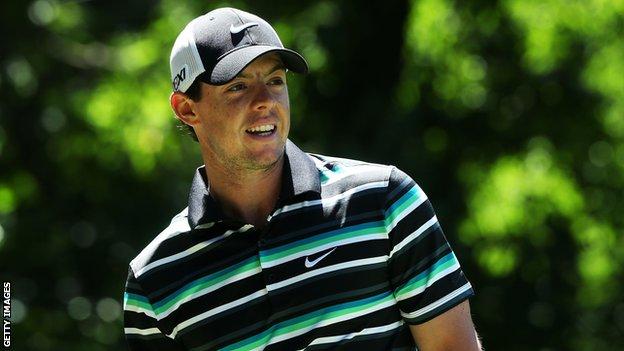 Defending champion Rory McIlroy said he felt like his old self after a round of 67 gave him a share of seventh heading into the final round of the US PGA.

McIlroy is six shots behind leader Jim Furyk on three under par, alongside England's Lee Westwood.

"It was good to feel the sort of rush again," said the Northern Irishman.

I'm definitely hitting the ball better than I was at Muirfield

"I felt good enough about my game that I could go out there and post a good score and at least give myself a chance going into the final day."

McIlroy was heading for a second consecutive missed cut in a major championship when he stood five over after 11 holes of his second round.

However, the 24-year-old birdied four of the next six holes to finish level par and ensure at least his participation in the weekend.

He remained level for the tournament after 12 holes on Saturday but birdied the 13th, holed from 50 feet for another on the 17th before chipping in on the 18th.

"I probably made up at least three, three and a half shots on those last two holes," said McIlroy, who has had only one top-three finish in 2013.

Westwood's chances of winning a first major title at the 63rd attempt appeared slim when he dropped three shots in the last two holes of his second round.

But the 40 year old carded three birdies and one bogey to reach the turn in 33 and, after dropping a shot at the 11th, birdied the 12th and 14th.

A bogey on the 15th halted his momentum but the former world number one rallied to return a 68.

Westwood, who held a two-shot lead going into the final round of the Open at Muirfield last month before fading to third, said: "I figured somewhere around 67 might give me a chance going into Sunday.

"I'm definitely hitting the ball better than I was at Muirfield. Obviously I didn't putt as well as I did at Muirfield this week, but it's another Sunday and another chance."