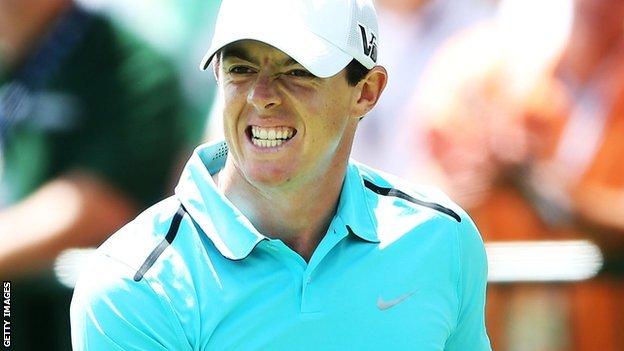 Rory McIlroy saw reasons for optimism after finishing tied for eighth at the US PGA, the season's final major.

Defending champion McIlroy finished seven shots behind winner Jason Dufner but it represented his only top-10 finish in a major this year.

"Hopefully, I can just bring that through to the next few weeks and have a strong finish to the season."

McIlory missed the cut at the Open after a first-round 79 he described as "brain dead", but went to Oak Hill in a more positive mood after watching videos of his record eight-shot US PGA win 12 months ago.

Starting the final round six shots back, McIlroy carded a birdie from long range at the third but his hopes effectively disappeared when he came unstuck at the fifth.

The defending champion was stunned to see his approach spin back off the green and onto the rocks on the edge of the water, fired his fourth shot over the green and ended up making a triple-bogey seven.

He hit back with birdies on the ninth, 10th and 13th but the damage had been done.

"I actually didn't hit a bad shot, 168 yards to the pin, nine iron," said McIlroy. "But I pitched it just in the place where you can't pitch it, I guess."