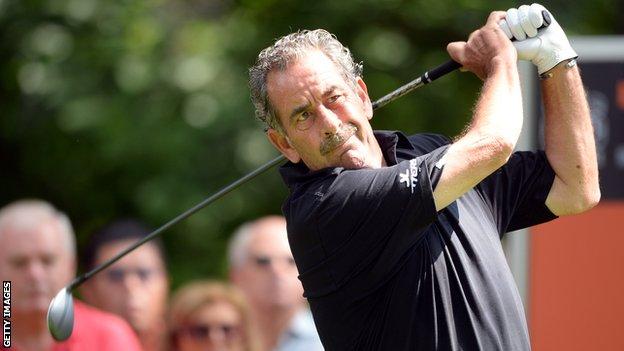 Sam Torrance has dubbed the greens at Fairmont St Andrews the best in Scotland ahead of the Scottish Senior Open.

That is perhaps not surprising considering he helped design the course, but he doesn't think that will give him an unfair advantage when the three-day tournament gets underway on Friday.

"Unfortunately, I know where all the trouble is, so that might be a disadvantage more than anything," said the 59-year-old Scot.

It is the fifth consecutive Scottish Senior Open to be held at the Fife course and the former Ryder Cup captain and newly named skipper of the Great Britain & Ireland team for the Seve Trophy was pleased with the condition of the course.

"It's fantastic, it's immaculate," said Torrance. "The greens are maybe the best in Scotland."

Torrance will be playing alongside two-time Scottish Senior Open champion Barry Lane, who won back-to-back titles in 2010 and 2011.

As he eyed a third win at St Andrews, Lane said he enjoys the event because links golf suits his golfing style.

"It's a different game, links golf to normal golf, and it just suits my eye," said the 53-year-old Englishman.

"When it's windy, I love to move the ball right to left and left to right and hit it low and high. I just seem to have a good imagination when I play on links golf courses."

Australia's Peter Fowler is also looking forward to the challenge presented by the wind.

"I've always enjoyed it here and I love playing in the wind, so the course sets up well for me," said the 54-year-old.

"The wind is probably the most challenging thing on this course, because it's elevated and quite near the water, which makes putting on the greens the most difficult part when the wind's blowing hard."

Fowler believes the key is staying out of the rough, telling BBC Sport that: "If I can stay straight and on the short grass, that will help a lot."

He will be playing alongside former world number one Ian Woosnam and Denmark's Steen Tinning, who comes fresh from a victory at the Berenberg Masters last week.

Meanwhile, Anders Forsbrand will be looking to defend his title, while Paul Wesselingh will be hoping for his third European Seniors Tour victory this year after claiming both the ISPS Handa PGA Championship in England and the Bad Ragaz PGA Open in Switzerland.

The pair will be teeing off at 09.20 BST alongside Wesselingh's fellow Englishman, Gary Wolstenholme.

Jason King, director of golf at Fairmont St Andrews, believes the host course will prove a challenge to the competitors.

"The rough will be a challenge," he said. "If they stray offline, it's going to be very difficult for the players.

"It's a great test of golfing ability and whoever wins it on Sunday will have to play incredibly well throughout the tournament."