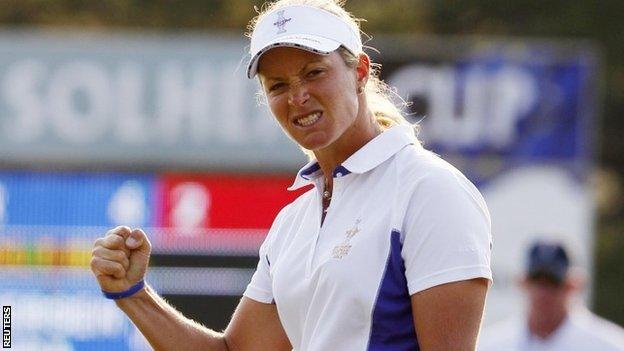 Pettersen putted impressively in the morning foursomes at Colorado Golf Club to hep Europe open up a 3-1 advantage.

The 32-year-old then partnered Spaniard Carlota Ciganda in a dramatic afternoon fourballs, which were split 2-2.

The key moment came at the 15th when Ciganda benefited from a wrong ruling after her second shot found a hazard.

After a lengthy discussion between officials, she was allowed to take her fourth shot from a long way behind the correct spot.

By taking her ball back by 40 yards, she had a better sight of the green, and hit a lovely shot to within 15 feet.

Ciganda sank the subsequent putt for a par five to halve the hole with Stacy Lewis and Lexi Thompson.

A birdie from Pettersen at the next proved decisive as the final two holes were halved, giving Europe a 1-up victory.

A statement from the LPGA later apologised for the wrong ruling.

It read: "We regret that an incorrect ruling was given and we apologise for any confusion that was caused on the course for the players.

"Ultimately, Ciganda proceeded to play according to the final ruling she was given and the result of the match does not change."

Despite winning the biennial contest two years ago for the first time since 2003, Europe were most observers' underdogs in Colorado as they have never won a Solheim Cup on American soil.

They started brightly, with Swedes Anna Nordqvist and Caroline Hedwall securing a 4&2 win over Lewis and Lizette Salas in the opening encounter.

Pettersen and Beatriz Recari - one of six rookies on the team - doubled the lead with a tight 2&1 victory over Brittany Lang and Angela Stanford.

"I am really enjoying playing with these youngsters," added Pettersen. "I am so proud of them and Carlota - she was a superstar. She hung in there tough. This was a fantastic point."

The Americans got their first point on the board via Morgan Pressel and Jessica Korda, who beat Catriona Matthew and Jodi Ewart-Shadoff 3&2.

But Azahara Munoz and Karine Icher pulled off a shock 2&1 win over former major winners Cristie Kerr and Paula Creamer, who had not lost in three previous encounters together.

The Americans reduced their deficit with the first point of the afternoon as Brittany Lincicome and Lang beat Nordqvist and Giulia Sergas 4&3.

The Americans levelled the fourballs when Kerr and Michelle Wie beat Matthew and 17-year-old Charley Hull 2&1 to trail Europe by two going into the second day.