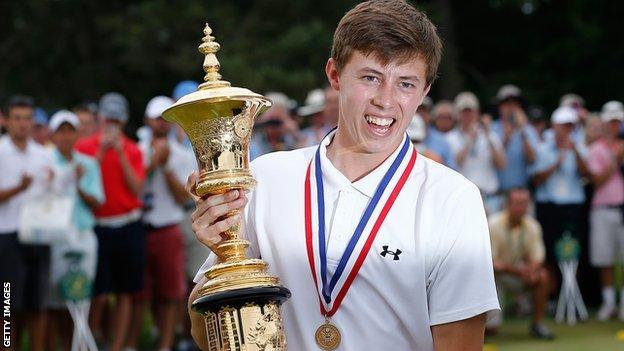 Matt Fitzpatrick became the first Englishman to win the US Amateur Championship title since 1911 after beating Australia's Oliver Goss 4&3.

The 18-year-old led for the majority of the 36-hole play-off at The Country Club in Brookline, Massachusetts.

He had already earned an exemption into the 2014 US Open by reaching the final, provided he remains an amateur.

He will also get a place at next year's Open at Royal Liverpool and a likely invitation to The Masters at Augusta.

The Sheffield-based player, who won the Silver Medal as top amateur at this year's Open at Muirfield, had his 14-year-old brother Alex as his caddie.

He led Goss by one after the morning round but the Australian tied the match on the opening hole of the second when his opponent missed a seven-foot par putt.

However Fitzpatrick, who came into the event as the number two ranked amateur in the world, won the next two holes to take the lead for good and went on to become the first English person to win the tournament since Harold Hilton 102 years ago.

"I mean, it's absolutely amazing," said Fitzpatrick, who won the title on the same course where amateur Francis Ouimet claimed his famous US Open victory in a play-off against Harry Vardon and Ted Ray a century ago.

"I can't really describe how I'm feeling at the minute. That's sort of what everyone wants in golf, and I'm pretty sure Justin Rose said that after his US Open that it's nice to go down in the history books.

"I'd probably say this week what's come out most is that my short game has just been really, really top drawer. I'd say my weakest part of my game was into the greens."

He will start a golf scholarship at Northwestern University in Chicago where former world number one and fellow Briton Luke Donald studied.