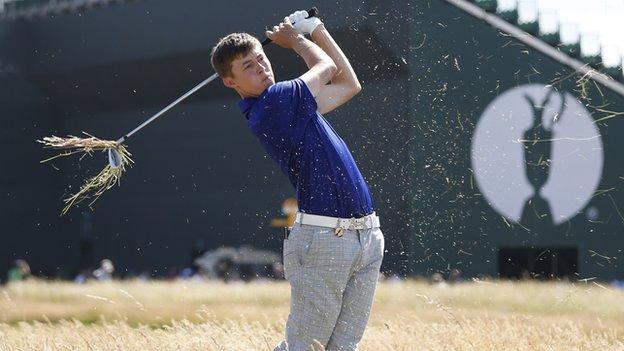 Fitzpatrick, 18, who won the silver medal as top amateur at last month's Open at Muirfield, will be part of a 10-man team at Southampton, New York.

Welshman Rhys Pugh is the only player with previous Walker Cup experience.

He was part of the team who beat the Americans at Royal Aberdeen in 2011.

The GB & I team will be bidding to defend the trophy they won in dramatic fashion two years ago, 14-12.

Pugh, 19, is joined in the line-up for the two-day contest on 7 and 8 September by another player who qualified for the Open at Muirfield, this year's Amateur champion, Northumbrian Garrick Porteous.

But there is no place in the team for young Devonian Jimmy Mullen, who was the only other amateur to make the cut and qualify for the weekend at Muirfield, where he finished five shots behind Fitzpatrick.

Fitzpatrick, who is due to return to the States later in September to play collegiate golf at Northwestern University in Chicago, will go into the Walker Cup clash on the back of his latest success.

He became the first Englishman to win the US Amateur Championship title in 102 years when he beat Australia's Oliver Goss 4 & 3 in Sunday's 36-hole final at Brookline, Massachusetts.

"We believe we have selected a strong team which includes some of the best amateur players in the world," said Edwards.

"The players have all competed at the highest levels of the amateur game and will relish the challenge of facing the Americans on their home soil.

"There will be some who are disappointed not to make the team but it is the job of the selectors to carefully consider the players available and select the strongest team they can."