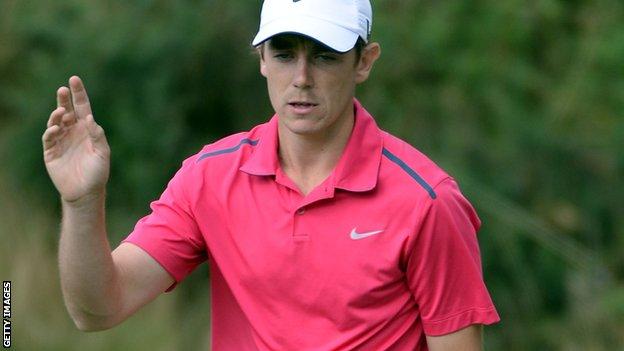 Englishman Tommy Fleetwood joined Argentine Ricardo Gonzalez at the top of the leaderboard after the Johnnie Walker Championship's third round.

The 22-year-old, chasing his first European Tour win, carded a five-under 67 to join Gonzalez, who carded 70, on 16-under-par 200 at Gleneagles.

That was two strokes ahead of Scotland's Stephen Gallacher (64) and Austrian Bernd Wiesberger (72).

I was a bit nervous out there at times and you get a little trembly over three or four-footers downhill left-to-right, but I coped really well

Fleetwood admitted he had to overcome occasional attack of the jitters to close the gap on 43-year-old Gonzalez, who had started the day with a one-stroke lead.

"This is what you spend hours and hours practising for," he said. "Getting up there in golf tournaments is what you dream about when you're a little kid.

"You want to play on the European Tour and the Johnnie Walker Championship is a massive event, one I always used to watch.

"I was a bit nervous out there at times and you get a little trembly over three or four-footers downhill left-to-right, but I coped really well."

Gallacher's score was the best of the day, while fellow Scotsman Scott Henry's 67 took him into a tie for sixth along with England's Fisher, who had a 67, and Australia's Brett Rumford, 69.

England's Mark Foster slipped down the field after a 73, as did Scotland's Craig Lee with a 71.