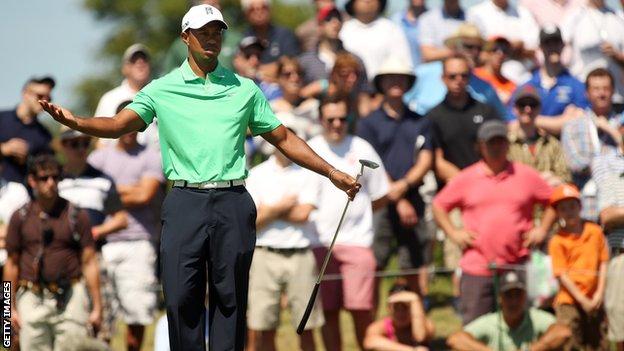 World number one Tiger Woods is four shots behind joint leaders Matt Kuchar and Gary Woodland after the third round of The Barclays event in New Jersey.

Woods, 37, carded a second successive two-under-par 69 to move within striking distance at eight under.

American Kevin Chappell is one shot off the lead after breaking the course record with a flawless nine-birdie round of 62.

Northern Ireland's Rory McIlroy shot a 71 to remain six behind the leaders.

US Open champion Justin Rose is a shot further back after posting a one-under 70, while fellow Englishman David Lynn shot a two-under 69 to join Woods four shots off the pace.

The Barclays at the Liberty National Golf Club is the first event of the end-of-season FedEx Cup play-offs on the PGA Tour.

The top 125 players on the list qualified for the tournament and the leading 100 players on the points list after Sunday's final round will advance to next week's event, the Deutsche Bank Classic in Boston.

From there the top 70 will play in the BMW Championship in Illinois and then the top 30 will compete for the top prize of £6.4m ($10m) in the concluding Tour Championship in Atlanta from 19-22 September.

American Kuchar can move to the top of the FedEx standings above current leader Woods if he wins the £924,000 ($1.44m) first prize.