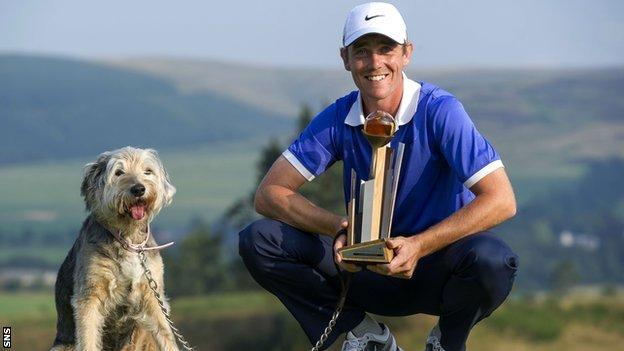 Englishman Tommy Fleetwood held his nerve to win the Johnnie Walker Championship at Gleneagles in a play-off with Scotland's Stephen Gallacher and Ricardo Gonzalez of Argentina.

The 22-year-old matched Gallacher's 18-under-par target by dint of an eagle on the 16th and a birdie on the last.

Gonzalez almost chipped in on the 18th to win the tournament outright.

But it was Fleetwood who prevailed in the play-off with the sole birdie on 18 to clinch his first European Tour win.

"I loved it, it was fantastic," he told BBC Scotland.

"It was a nice play-off to be part of. They are two really nice guys, Ricardo and Stevie. I hit two great golf shots and two good putts and that's all you can do.

"To win my first Tour event feels absolutely amazing. It's a lifetime goal that's been taken care of and hopefully I can move on and win some more. To call yourself a European Tour winner is just awesome."

I love Scotland and I love this golf course. The people carried me around today. They were absolutely brilliant

Gallacher looked out of contention when he ran up a triple-bogey seven on the 11th in a rollercoaster final round, but bounced back with birdies at 14 and 16 before holing from 15ft for an eagle at the last.

Gonzalez, joint leader with Southport's Fleetwood after Saturday, will be left to rue how close he came to making an eagle from the bunker to prevent the play-off, which was played on the par-five final hole.

The trio found the middle of the fairway off the tee but Gonzalez over-hit his second shot, Gallacher found a bunker to the right of the green and Fleetwood found the edge of the putting surface.

Bathgate's Gallacher failed to get up and down and carded a par five, while Gonzalez three-putted.

Fleetwood's third shot shaved the edge of the hole but stayed within 3ft, and from there he claimed his maiden Tour victory.

He said: "I love Scotland and I love this golf course. The people carried me around today. They were absolutely brilliant. It was fantastic to have the support."

The victor was accompanied during his rounds, and while posing with the trophy, by his family dog.

Fleetwood added: "Maisy is 14 so she is getting on. She has supported me through all my tournaments - amateur, county, England.

"Scotland are nice about it. They let the dogs walk the course, most of the time. Any time we can get a tournament in Scotland, Maisy always comes. She has a great time.

"She got diagnosed with cancer a couple of weeks ago and we don't know how long she's got left. This might be her last time."