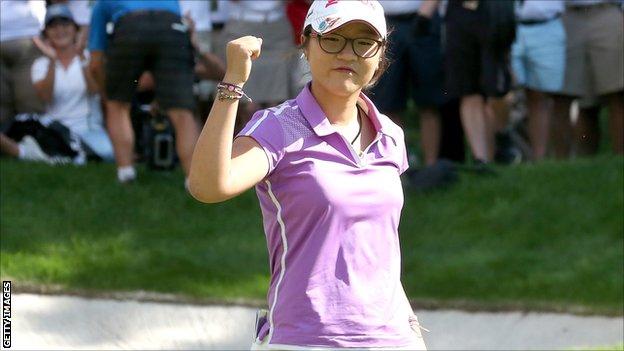 Ko's triumph last year at the age of 15 years and four months made her the youngest LPGA title winner in history.

And she backed up that milestone victory with a five-stroke success over France's Karine Icher in Vancouver.

Ko, now 16, carded a six under round of 64 at Royal Mayfair Golf Club for a 15 under total of 265 to become the first amateur to win two LPGA titles.

The bespectacled teenager from Auckland curled in a birdie putt at 18 - her seventh birdie of the day - lifting her arms in triumph as it dropped.

Icher, one of a number of Europeans playing this week in the wake of their Solheim Cup triumph over the United States in Colorado, carded a 67 for 270.

Sweden's Caroline Hedwall, the first player to win all five of her matches in the Solheim Cup, had started the day with a one-stroke lead. She carded a 71 to share third on 271, alongside American Brittany Lincicome, who shot 69.

Ko's fourth victory in a professional tournament will renew the question of when she will turn professional.

She has also won the New Zealand Women's Open, a Ladies' European Tour event, in February, while her win at the age of 14 in the Australian LPGA's Women's New South Wales Open in January 2012 had made her the youngest player male or female to win a professional tournament.