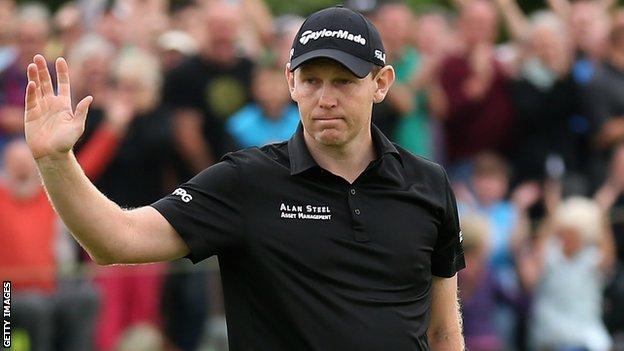 After narrowly missing out on winning the Johnnie Walker Championship, Stephen Gallacher's next battle is to be fit for this week's Wales Open.

The 39-year-old Scot at Gleneagles in a three-man play-off after a back injury threatened to prevent him starting the tournament.

"I am going for a scan tomorrow and, if everything's OK, I'll go down," Gallacher told BBC Scotland.

"If you had given me a play-off on Monday, I would have been quite happy."

I was just a bit disappointed I didn't do it in the play-off, but I was happy with everything that went on

Gallacher, who was chasing his third European Tour title, had looked like winning the tournament until Fleetwood and Argentina's Ricardo Gonzalez birdied the final hole to take the tournament into a play-off.

The 22-year-old Englishman's birdie at the first extra hole secured Fleetwood his first tour title, but Gallacher was philosophical about missing the top prize.

"I'm obviously disappointed not to win the play-off, but I gave it a good go," he said.

"I was just a bit disappointed I didn't do it in the play-off, but I was happy with everything that went on."

Gallacher following up Saturday's stunning 64 with a final-round that would have been better than his 67 had it not been for a triple bogey seven on the 12th.

"It was just that one shot and that is how fine a line it is between winning and losing," said the Scot, who blamed a sandy divot for the wayward shot.

The Johnnie Walker Championship was seen as a test for the Gleneagles course ahead of next year's Ryder Cup.

However, Gallacher does not expect his good performance to have much bearing on European captain Paul McGinley's final team selection.

"There's a long way to go before that," the Scot said. "I am not thinking too far ahead.

"I am just bothered about if I can tee it up in Wales [at former Ryder Cup venue Celtic Manor] more than anything."