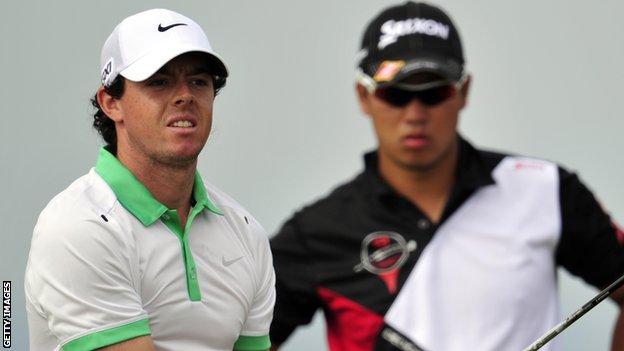 Europe's top golfers will take on Asia in a new matchplay tournament, the EurAsia Cup, from next year.

The inaugural EurAsia Cup will be held at the Glenmarie Golf and Country Club in Malaysia on 28-30 March 2014, with a format similar to the Ryder Cup.

Europe's 10-man team will consist of the Race to Dubai 2013 top four, the top four available from the world rankings and two captain's picks.

The captain will be selected by the European Tour at a later date.

Flying the flag for Europe

If the EurAsia Cup team was selected on the current rankings now, the eight would be:

The Asian team will include the top four players from the final 2013 Asian Tour Order of Merit, the leading three players invited on the basis of their world ranking, and three captain's picks.

Hideki Matsuyama, 21, is expected to be the star of the Asian team with three top 20 finishes in majors this year.

It will become the third matchplay event involving Europe after the Ryder Cup and the biennial Seve Trophy, which began in 2000 and is contested between teams from Great Britain and Ireland, and Continental Europe.

The EurAsia Cup, which will be an early part of the European Tour 2014 schedule, is one of two new events announced.

The Nedbank Golf Challenge, which takes place in South Africa from 5-8 December 2013, will now feature a 30-player field instead of the usual 12.