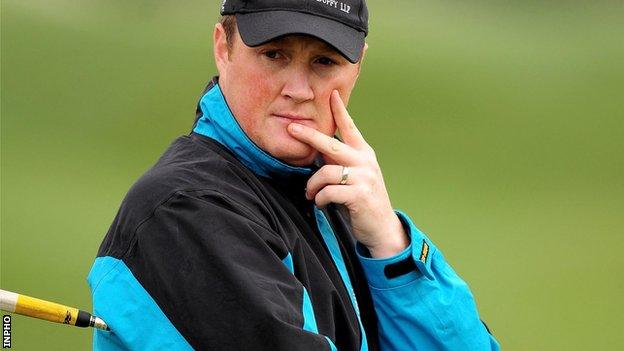 Derry man Michael McGeady is one behind the leaders after firing a six-under 65 on day one in the Northern Ireland Open at Galgorm Castle.

McGeady was one behind German Bernd Ritthammer and England's James Ruth.

Nick Dougherty and Oliver Wilson both showed a return to form as they carded rounds of 66 with Gareth Shaw firing a 68 and Michael Hoey on 70.

Nuremberg-born Ritthammer, who finished second in the Challenge de Espana event in June, fired a flawless seven-birdie 64 as he took advantage of the benign conditions at the Ballymena course and was later joined by 28-year-old Plymouth native Ruth.

Donegal-based McGeady is playing in only his second Challenge Tour event of the year.

McGeady, 35, has a Challenge Tour victory to his name after triumphing at the Wales Challenge in 2008 but lost his card for the second-tier European circuit at the end of the 2011 season.

However, McGeady clearly likes the Galgorm course as he achieved top-six finishes in the two most recent EuroPro events staged at the Ballymena venue.

The Derry man's round on Thursday included a remarkable nine birdies as he produced tidy halves of 32 and 33.

Former Madrid Masters champion McGowan, who narrowly missed out on earning a Ryder Cup place in 2010, also carded a 65 which was highlighted by an eagle-three at the last.

Dougherty, who like McGowan is now aged 31, has had three European Tour wins in his career but he has struggled badly for form over the past three seasons.

Liverpool-born Dougherty has earned less than £400 in 10 Challenge Tour events this season and lies 252nd in the rankings.

However, he showed signs of a return to form on Thursday in his seven-birdie 66 while 2008 European Ryder Cup player Wilson dropped only one shot as he matched Dougherty's round.

Also on 66 was another Englishman Andrew Johnston whose round included a hole in one at the seventh.

Local hope Shaw found himself at one over par on two occasions in his opening nine but five birdies in nine holes saw him improve to four under before he finished with a disappointing six at the long 18th.

Shaw, who shared fifth place at the Irish Open in June, is currently chasing a European Tour card for 2014 both from the Race to Dubai and Challenge Tour routes.

Recent Russian Open champion Hoey bogeyed three of his opening six holes to slip to two over and needed birdies at the 15th and last to better par.